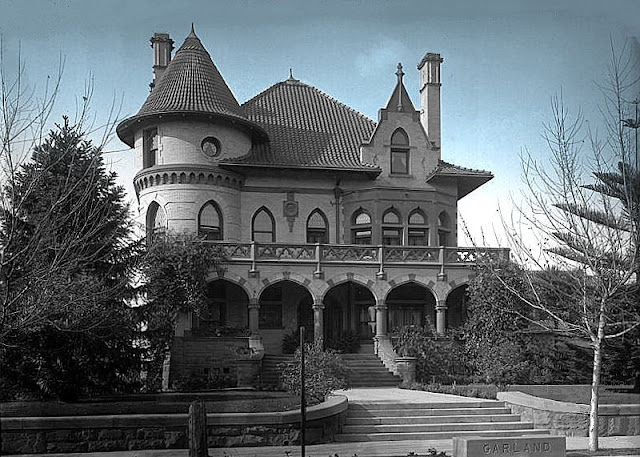 
Among the early-20th-century Los Angeles plutocracy were two unrelated but easily confused players named William Garland. The younger of these, known as William May Garland, was a Maine-born real estate developer well-known for his distinctive red-and-white billboards and print advertisements that appeared across the city from the 1890s into the 1920s; he had a dinner-plate-sized hand in the early development of the West Adams district as it spread westward from Figueroa Street, including that of the St. James Park tract, where he built his own residence at 815 West Adams Street in 1891, soon after his arrival in the city from the east. Also arriving to reside in Los Angeles around the same time, at least part-time, via Canada and Arizona, was Irish-born William Garland (who either did not have or did use a middle name), who, once having decided to retire from the presidency of the Gila Valley, Globe & Northern Railway, would build our subject house in 1898.

As Los Angeles prepared for the exponential and far-reaching development it would experience in the new century, there was, as would be the case for decades to come, no particular neighborhood to which the affluent would be attracted. While West Adams seemed to offer the most prestige, there was also the competitive Westlake District, expanding to the other side of the eponymous greensward by means of Gaylord Wilshire's boulevard, a big new carrot for rich homeseekers. William Garland, reassessing the city's development once it came time to build, thought better of his original choice, Bunker Hill, convenient by Angels Flight to the business district but quickly losing favor as a bon ton district. The Los Angeles Times of October 1, 1897, described the progress of Garland's new house this way:

"William Garland, who is president of an Arizona railroad company, recently prepared to build a residence on [a] lot at [the] corner of Grand avenue and Fourth, but when he came to get out his plans he found that the lot was not big enough. Since then, he has purchased three lots at the corner of Westlake avenue and Eighth street, in the Bonnie Brae tract.... On this land he will build a fine residence, which it is said will cost over $20,000."

Garland had hired the highly regarded architects Octavius Morgan and John A. Walls to design his house, perhaps commissioning the firm, established in 1890, early on in its existence, before the rarefied air began to leak precipitously out of Bunker Hill's image of social eminence; by 1897, the alternate Bonnie Brae site for the house would not have just been chosen because of a too-small lot on Grand Street. Once construction was underway on Westlake Avenue, the Times gave a full description on April 8, 1898:

"The residence, as well as the commodious barn adjoining, is substantially built and both are carried out in the charming style of the French chateaux of the period of Louis XIV, which style is suited for the requi[r]ements of fine modern residences.... The construction of the inclosing walls is of brick and Arizona sandstone, the soft warm color of the latter harmonizing with the buff of the pressed brick with which the exterior of the building is generally faced. The roofs are covered with roll tile, burnt a deep red shade, which, with [the] bronze green of the copper forming the cresting and finials, completes a most pleasing scheme of color.... The principal entrance is by brownstone steps, through an arcaded veranda with mosaic floor of tile.... The barn is carried out in all particulars on the general scale of the residence, and will amply provide convenience for its blue-blooded equine inhabitants.... The materials are generally of home production, and show that the best can be obtained in our own immediate vicinity."

Once installed in their new house, Garland and his wife Ida and their sons Grover and William Junior were attended to by six live-in servants. Once finished with railroading, Garland took up the second career of many a Los Angeles man done with his first. Investing his fortune in real estate—and no doubt causing further confusion with William May Garland—he built the Garland Building, still at 740 South Broadway, in 1913. Apparently happy with his house, Garland hired Morgan, Walls & Morgan to design it. The Garland Building houses the Globe Theatre, originally known as the Morosco; another project of Garland's (but one not by the Morgan firm) was the 1920 Pantages Building at Seventh and Broadway, housing the Pantages Theatre (now the Downtown Jewelry Exchange/Warner Bros. Theatre).

Even as the Westlake neighborhood began to decline—with ever-expanding choices of new developments, even expensive districts in Los Angeles were subject to becoming déclassé before their infrastructure had worn out—the Garlands remained, William expiring in the house on November 24, 1928. His death and Ida's departure soon after—she would live until 1953—left their 30-year-old house in the by-now bedraggled Westlake neighborhood to become a café. The house and its outbuildings, which included a garage added at the rear of the lot in 1910, survived various commercial uses until soon after February 8, 1956, when demolition permits were issued by the Department of Building and Safety.