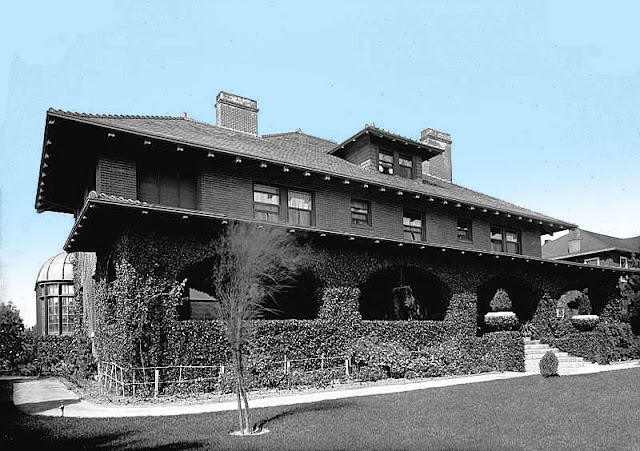 
David Chambers McCan was that rare native New Orleanian willing to admit that greater opportunity—especially for an inventive mind—lay elsewhere, his elsewhere being distant Los Angeles. Settling in the still relatively small but boundless and booming Western city soon after the turn of the 20th century, McCan was issued a permit by the Department of Buildings on November 22, 1905, to begin construction of a substantial suburban house at the northeast corner of West Adams Street (as it was then designated) and Cimarron. Within five years, another remarkable new Angeleno of unusual intellect, William Andrews Clark, Junior, was in residence at 2205 West Adams; the house would then became the basis for a major in-town estate complete with an observatory and a famous enduring library bearing Clark's name.

In the image above, the glimpse of a house at right is of 2193 West Adams, moved by its owner from across the street in 1904; it would be demolished in 1915 as Clark expanded from McCan's original corner to cover an entire walled city block.

The complete story of 2205 West Adams Boulevard will appear in due course.