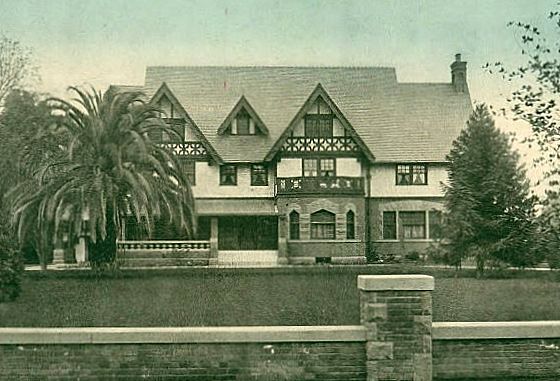 
J. Ross Clark was the younger brother of bumptious Montana copper king and U.S. senator William Andrews Clark; uncle of William Andrews Clark Jr., founder of the Los Angeles Philharmonic who also built the private library at Adams and Cimarron named for his father; and uncle of New York eccentric Huguette Clark. The Clarks were rich enough to seem not to care too much that their flamboyance or peculiarities kept them out of the best of society; they were in any case people of America rather than of just one coast or the other. J. Ross Clark was prominent and industrious in his own right in Southern California; a big house was in order. In 1903 Clark had Hunt & Eager design one for him at 710 West Adams Street (upgraded to "Boulevard" in the '20s partially in attempt to stave off the decline of the district); there, his family acquired its own bit of notoriety when their son Walter went down on the Titanic. Walter's wife Virginia, who survived, remarried too soon after becoming a widow for the tastes of her former in-laws, who tussled with her for custody of their grandchild for years while living in the house. A permit for its demolition was issued by the city on June 10, 1975.