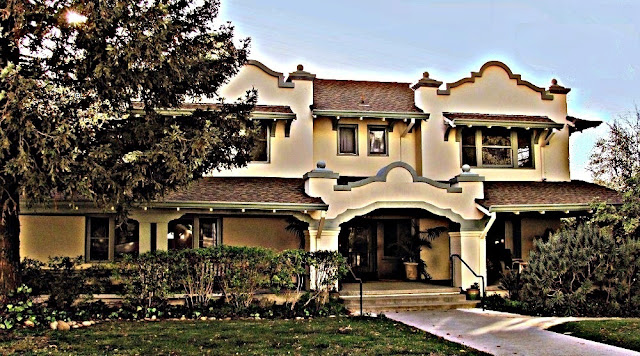 
While the Earle C. Anthony house is known for its long-distance move—all the way from Wilshire Boulevard and Berendo Street to Beverly Hills in 1923—another of the considerable number of relocated central Los Angeles houses traveled even farther west five years later. Built at 629 South Harvard Boulevard circa 1911, apparently on spec by contractor George F. Hall, the Mission Revival–style house was purchased in early 1912 by Everett H. Seaver. Seaver, secretary of the wholesale California Drug & Chemical Company, had for a stepfather-in-law Kansas City millionaire Charles H. Sharp, who had recently settled in Los Angeles with a significant house purchase of his own. Another residence that would be moved but which was originally at the northwest corner of Shatto Place, 3143 Wilshire Boulevard would be the Seavers' next stop after Mr. Sharp died in December 1915; moving in with her mother, the Seavers sold 629 South Harvard early the next year to Frank J. Schwartz. By 1920, wholesale milliner Arthur L. Daves and his family were in residence.

While some sources cite an original build date of 1892 for 629 South Harvard Boulevard, the development in which it was situated, the Normandy Hill Tract, did not open until 1906. The property values of Normandy Hill, along with all of the less-than-strictly-zoned subdivisions east of Wilton Place, rose so rapidly during the 1920s—when the population of Los Angeles more than doubled—that some savvy owners, especially those of lots close to Wilshire Boulevard, cashed out or developed multi-unit housing where their single-family houses once stood. Rather than being razed at a young age, some of these residences were trucked west to new lots (often to Windsor Square), though none traveled as far as 629. 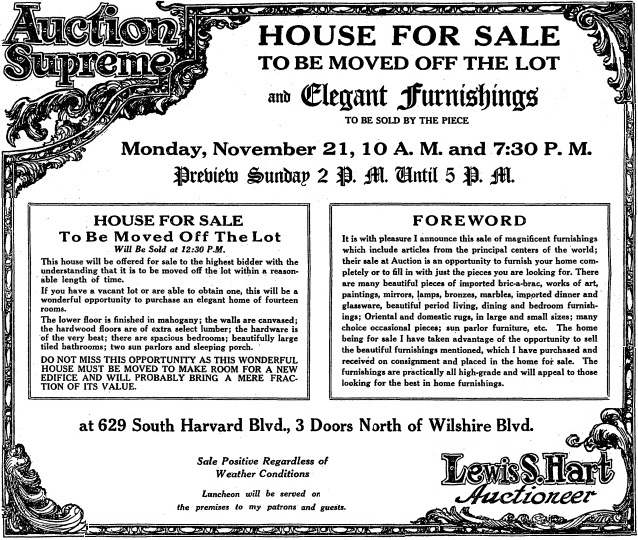 According to his 1933 obituary, Arthur Daves was known locally as "the father of the millinery industry." Apparently taking advantage of the interest in his property by the Congregation B’nai B'rith, which was building its Wilshire Boulevard Temple around the corner at Wilshire and Hobart, Daves had ordered everything sold in 1927; it was the auction in November of that year that caught the eye of John and Ruth Elerath, members of the First Methodist Church of Los Angeles. The Eleraths bought the Seaver/Schwartz/Daves residence and offered it to the Methodists as a religious and recreational retreat for a lot the church had purchased in Temescal Canyon. The couple was part of groups formed from the Sunday school classes at First Methodist, he of "We Boys" and she of the distaff "J.O.C." ("Jesus Our Companion"), which, according to the official history of Aldersgate Lodge (as the house came to be called), "met for banquets, debates, retreats, and sought a permanent location for their gatherings" in developing Pacific Palisades. By January 1928, with things moving quickly, the Kress House Moving Company had been hired to saw the house in two and transport it for reassembly where it sits today at 925 Haverford Avenue. According to a report filed at the time the house was being recommended as a Los Angeles Historic-Cultural Monument in 2008, "Jack Elerath himself [dug] the basement.... To raise funds and to celebrate the project's completion, a symbolic wedding was held with 'Mr. We Boy' and 'Miss J.O.C.' as a bride and groom (both played by men), coming down the staircase...." It is unclear as to why a member of the J.O.C. wasn't allowed to portray the bride; at any rate, the house was ready in its new location for the Palisades Methodists' 1928 Fourth of July celebration.

While various spatial additions and alterations have been made toward the rear of the house since the early 1940s, much of the house's original Craftsman interior remains intact. At some point the original tile roof was replaced with composition shingles. When the house changed hands within the Methodist community in 1961, it was renamed Aldersgate Lodge after the meeting house on London's Aldersgate Street, famously the site of John Wesley's spiritual reawaking. With the neighborhood now built up and trees grown tall, the rooftop sign and its wooden framework were removed. When the house was originally built, Normandy Hill was platted in a landscape of beanfields far west of downtown Los Angeles; as the city's suburbanization spread west like wildfire, what was prairie became suburban, what was suburban became urban. The high-rise commercialization of Wilshire Boulevard commercialization and then blight followed, as it did for most close-in neighborhoods. After only 17 years, 629 South Harvard Boulevard was moved to a new prairie, if hillier, which in turn became surburban. But now, after 88 years in Pacific Palisades, the house remains unblighted in an unblighted landscape—with was no farther Westward Ho! to go Los Angeles, the Westside emerged as fashion's resting place. 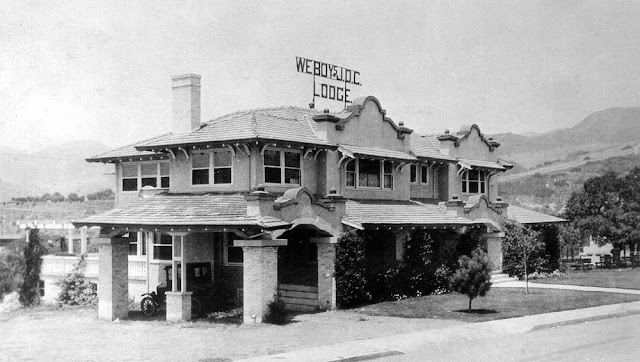