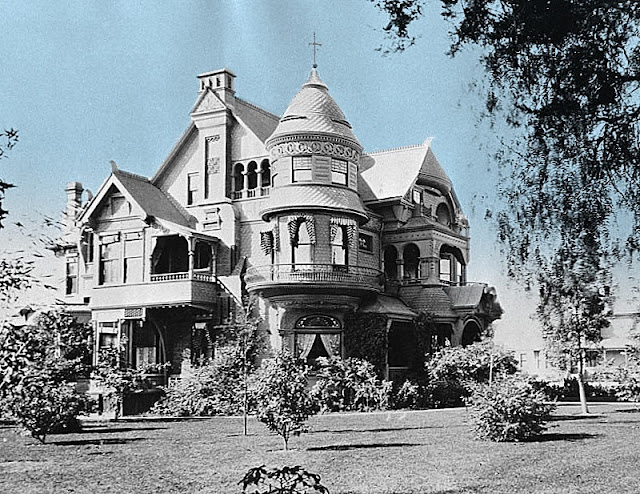 
Bostonian Charles H. Capen had been a visitor to Southern California for many winters; once he decided to retire to the coast, he went all-out on a house on what was, along with South Figueroa Street, one of the two most impressive residential thoroughfares in Los Angeles. At the time—the house was completed by the spring of 1891 to the plans of architects William O. Merithew and Walter Ferris—Capen's new house was on what was called West Adams Street. By the time the street was upgraded to "Boulevard" in the 1920s, the district was fading. Fashion was fleeing the area for more modern suburbs to the north and west. Saavy West Adamsites realized that they were sitting on gold mines as the population of Los Angeles exploded after World War I; they would either add fire escapes and convert their aging barns into apartments, or replace them altogether with new multi-unit housing to provide the cash for new digs elsewhere that didn't reek of Victorian excess. Indeed, Capen's extravaganza was hopelessly old-fashioned by the time it was barely a decade old, with complicated vertical architecture giving way to smooth horizontal, at least in terms of housing. By the '20s, and certainly by the '30s, all that imbrication and shingling and complicated woodwork had become a nightmare to maintain—enter stucco boxes. Eight-eighteen West Adams managed to survive until 1956; after a demolition permit was issued on August 10th of that year, it joined the long parade of Victorian architecture to the graveyard. 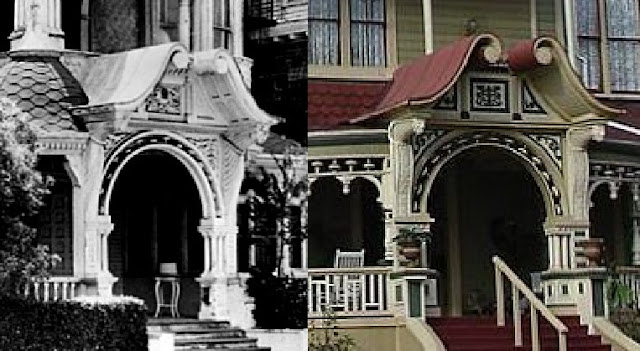