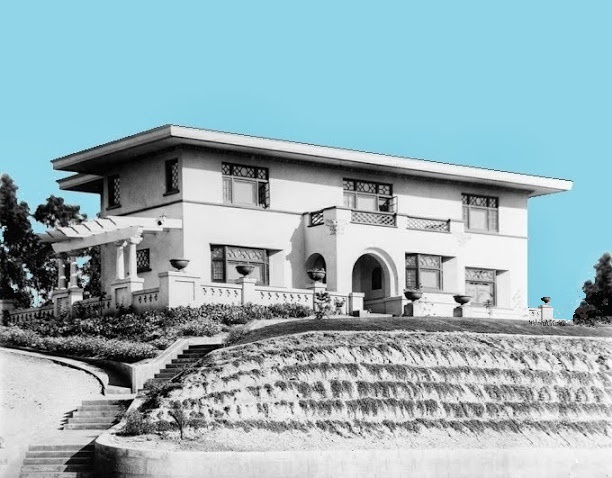 John Parkinson is one of those men of whom it could accurately be said, "He built Los Angeles." His many distinguished and even iconic buildings, many still standing, helped to elevate the stature of the city beyond its history as a 19th-century Western town in the shadow of San Francisco. Among his works are the Homer Laughlin Building on Broadway (a.k.a. the Grand Central Market, 1896) and the Braly Block (a.k.a. the Continental Building, 1902) and the Alexandria Hotel (1906) on Spring Street. With his early partner Edwin Bergstrom he designed the A. G. Bartlett building (a.k.a. Union Oil, 1911) on West Seventh; with his son Donald at the firm from 1920, he designed the Coliseum (1923) and, with Albert Martin, no less an icon than City Hall (1928). Adding to the roster the masterpiece of his Bullock's-Wilshire store (opened in 1929), it becomes clear that the man and the history of Los Angeles can be read as one. 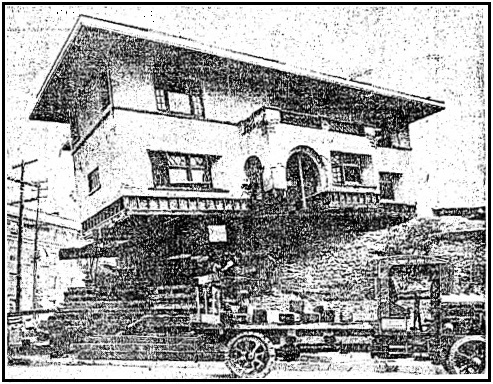 The architect's own house once stood downtown at the southeast corner of St. Paul Avenue and Sixth Street, where he lived with his family from 1901 to 1915 in five-bedroom, five-bath splendor. Much discussed in architectural trade journals of the era, 600 St. Paul Avenue reflected the train of thought also influencing Irving Gill and the Prairie School and seems most often to be described as early Mission Revival. Our initial assumption was that 600 had been demolished perhaps even as late as the '40s, decades after Parkinson left, and that a great deal of earth was removed with it to make way for the building now on the corner and flush with the sidewalk, one erected in 1948 for Westinghouse Electric's West Coast engineering and sales staff and currently housing medical offices. There have been pictures available of 600 from its Parkinson years for some time, but we'd found none from after the architect's tenure on St. Paul Avenue. It was then by chance that we came across a small item in the Los Angeles Times of March 15, 1925, mentioning that master house mover George R. Kress would begin operations the next week to move the Parkinson house to an unspecified "outlying residential district"; house moving was routine during the '20s, it often being more economical, when streets were widened or trade threatened to intrude, to move one's home than to build something new. Then we stumbled upon the picture seen above in an unrelated story in the Times of July 25, 1926, the house not identified in the text but recognizable to us...while at first glance it appeared to be an earthquake or flood or tornado casualty, it was instead a distinctive house in the process of being moved off its corner perch, visual confirmation that the Parkinson house must have had a second act. Before discovering firmer evidence of the move, we had wondered if Parkinson himself might have taken his house with him when he left St. Paul Avenue in 1915 for 688 Wilshire Place, situated just below the famous boulevard that was then still thoroughly residential but that by 1929 would be in the shadow of his own Bullock's-Wilshire store. (As an architect, Parkinson was in a position to grasp demographic trends ahead of the curve. He sold 688 in March 1920 and moved to 808 Woodacres Road in Santa Monica, no doubt understanding that Wilshire would eventually be a commercial thoroughfare in short order, all the way, in fact, to the ocean.) Photographs of his house on Wilshire Place, however, reveal a structure with large crossing gables, shapes that are the antithesis of Mission and Prairie styles: more evidence that he left his old house behind on St. Paul. Additional research revealed that the St. Paul house had its distinguished pedigree bolstered even further after the departure of Parkinson when it became the first home of the Denishawn School of Dancing and Related Arts, founded by Ruth St. Denis and Ted Shawn in 1915. Two of the school's most famous students were Lillian and Dorothy Gish, who, along with their mother, leased 600 St. Paul briefly while Ruth and Ted were on tour that fall, long enough for the family to become listed there in the 1916 Los Angeles city directory and for there to be—at least as anticipated by theater columnist Grace Kingsley of the Times—"lawn parties and pink teas galore." Lillian reported in her 1969 autobiography that her mother had rented the house, its large living room converted into a studio, as practice space for her daughters. The Denishawn School moved to the former quarters of the Westlake School for Girls at 616 South Alvarado Street two years later. In the wake of all this architectural and terpsichorian creativity came the Liberty Club, apparently a facility for demobbed servicemen, which appears to have occupied 600 St. Paul until at least several years after the First World War. 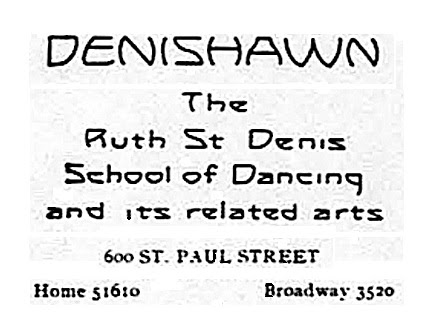 But the question remained: To where might the house have been moved? There had been hope that it might still be standing to the west, most likely along the Sixth Street corridor, perhaps as far west as Hancock Park—though house moves even to Beverly Hills were not unusual. If it did happen to still stand, it was likely to have been altered beyond recognition or it would most certainly be celebrated today by the multitude of Los Angeles architecture aficionados and Parkinson authorities such as Stephen Gee, the title of whose excellent Iconic Vision: John Parkinson, Architect of Los Angeles tells it all. While we had offered the prize of dinner at Romanoff's or Perino's to the first person and his hundred closest friends who found the location of Parkinson's St. Paul Avenue house after its move—who discovered whether it was dead or alive—it seems that we get to treat ourselves to a fantasy meal: The house John Parkinson built for himself at 600 St. Paul Avenue has been found, even if it turns out to have been lost again, once and for all. 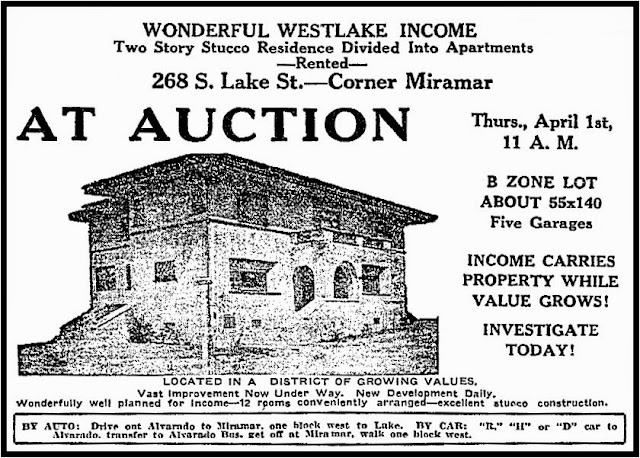 Almost by chance, while researching our project on early residential Wilshire Boulevard, we came across an advertisement in the Times of March 28, 1926, picturing a familiar—and needless to say, distinctive—building at the northeast corner of Lake and Miramar streets. The photograph in the auction ad appears to reveal slight alterations to the house that once stood high up at 600 St. Paul Avenue, at least in terms of its entrance stairs. Then surfaced further "clews" (as the word was often spelled once upon a time): In a tiny item in the Times of January 25, 1925, it was noted that our moving man George Kress had just trundled a large house to Lake and Miramar from 626 South Alvarado Street, which would have been seven weeks before his removal of the Parkinson house to the same locale was reported; building permits indicate that the Alvarado Street house settled at the northwest corner of Lake and Miramar. In March, Kress moved a house from 525 South Westlake to the same Lake Street block; then on the 24th of the same month, permits were issued for Kress's relocation of 600 St. Paul Avenue. While close in, the tract involved had only just recently been opened for subdivision. There was wholesale redevelopment of 17.5 acres at the southwest corner of Alvarado and First streets south nearly to Third; St. Vincent Hospital was planning its new facility at the southern end, with the northerly section zoned residential. At any rate, with its provenance by now forgotten, John Parkinson's 1901 home, along with the other houses moved to the neighborhood, found a new life as apartments, very likely anticipating the need to accommodate staff of the new medical facility just across the street. The Parkinson house would have about as many years at 268 South Lake Street as it did on St. Paul Avenue: In late 1949, St. Vincent's pursuit of zoning variances for hospital expansion into the blocks to its north sounded the death knell for 268 South Lake, which appears to still stand, if fuzzily, in high-altitude 1948 images. The Department of Building and Safety issued a demolition permit for the historic building on December 7, 1950; in the spring of 1952, the hospital's current building for its College of Nursing opened on the site. 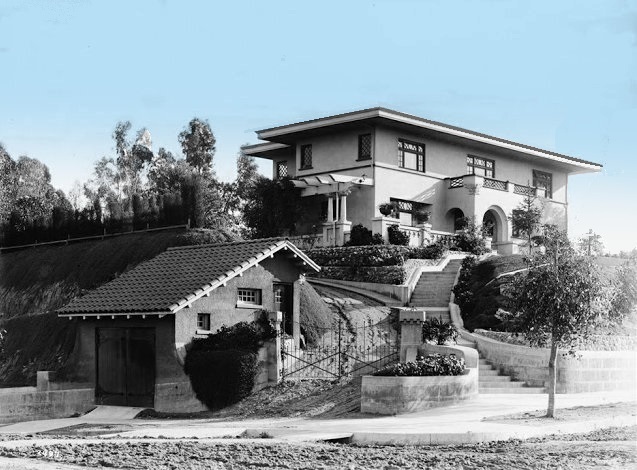 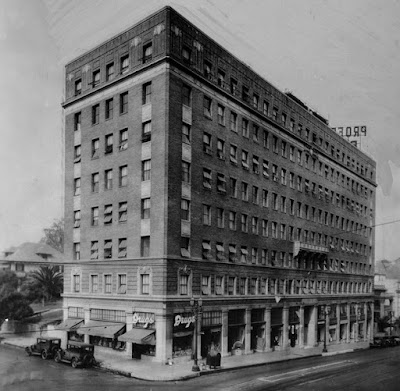 What is as yet unclear is what occupied the site of 600
between 1925 and the erection of the Westinghouse Building
on its site in 1948. Still there, the latter building is seen below
as it appeared in the Los Angeles Times, January 3, 1949. 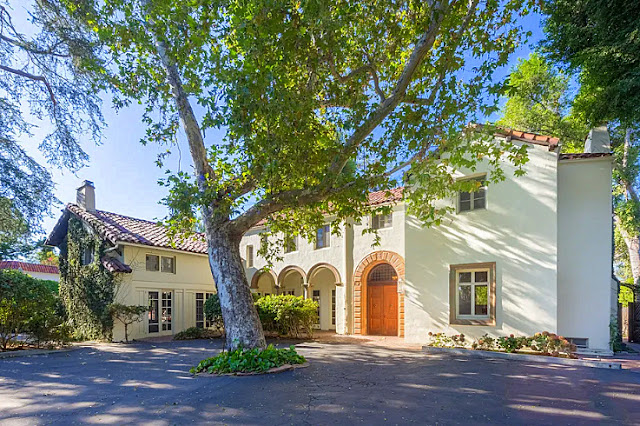