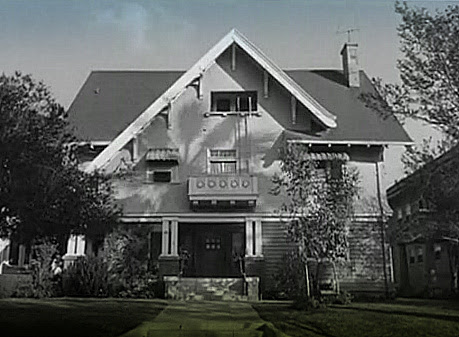 Cornelia Hilyard, society poetess, or a lady with pretensions on both counts, hung on to her son and her house just a little too long. Malcolm Hilyard was a mess; her neighborhood was in the midst of its long decline in 1964. 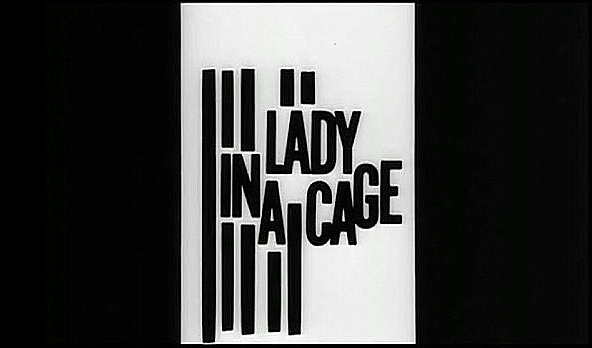 We always wondered exactly where Mrs. Hilyard lived. We first met her years ago in the odd movie Lady in a Cage, probably on television. Clearly filmed in Los Angeles in one of those parts of town that are the most interesting but also the most determinedly overlooked—those neighborhoods of similar big-gabled wooden houses from, say, Wilton Place east, down as far as West Adams and University Park—we had the feeling that Mrs. Hilyard most likely lived north of the then-new Santa Monica Freeway, somewhere around Pico or Venice boulevards. Watching the movie again revealed the street number of the featured house—1132—which we'd never noticed before and which would in fact put it only a block and a half or so above Pico, if it were, as suspected, on a north-south thoroughfare. The movie uses not only the front of its featured house but the back, including the service alley, which indicates a street closer to downtown. To narrow the search, we took a look at a map to find streets with alleys. And after a little bit of sleuthing by car, eureka! There popped into view Mrs. Hilyard's house at 1132 South Lake Street in today's Pico-Union district.


In 1964 Olivia de Havilland's career was on a track parallel to that of her character Mrs. Hilyard and to the aging neighborhood around Lake Street—dignity was getting harder to assume. In the era of Hush...Hush, Sweet Charlotte and Whatever Happened to Baby Jane?, the roles offered aging movie stars were sparse. If they wanted to keep their hand in, they had to be able to see the camp value of the few juicy roles offered them and to have a sense of humor—certainly Lady in a Cage, if played totally straight, would have been too dark to succeed commercially. The movie, released in July 1964, is seen by some as precociously reflective of post-JFK-assassination America and the end of a supposedly orderly country. In terms of Los Angeles, it seems predictive of the Watts Riots a year away in another hot summer, and it even has some characters eerily suggestive of the Manson Family to come. There are shots in the movie reflective of common fears of "The Bomb" (military jets in formation overhead) and of urban alienation and violence. There is frantic traffic in July heat. It is interesting to see Lake Street in 1964 looking as good as it does, although as you watch more of the movie you can see that the house is in a deteriorating neighborhood; wholesale moves away to roomier districts west of downtown and to the Valley had been going on since the Depression came on. No doubt after her ordeal Mrs. Hilyard sold 1132 and moved west to safer precincts, to an apartment in Beverly Hills, say, or maybe to Pasadena (she's that type). Lady in a Cage, despite seeming a bit silly today, remains disturbing—worth looking at for a glimpse into how downtown Los Angeles began to crumble in reality. There is decay and even squalor evident in 1964, but to this day, here and there, are quite well-maintained older sections. What is striking is that even now there are miles and miles of great big pre-Depression houses and apartment buildings in an enormous swath of old Los Angeles. There is still a lot of life being lived in these big old wooden L.A. houses, even if, sadly, bars on the windows might be necessary these days. The truth is, James Caan could invade the loveliest house in Hancock Park or the Westside any day, where private patrols substitute for bars. 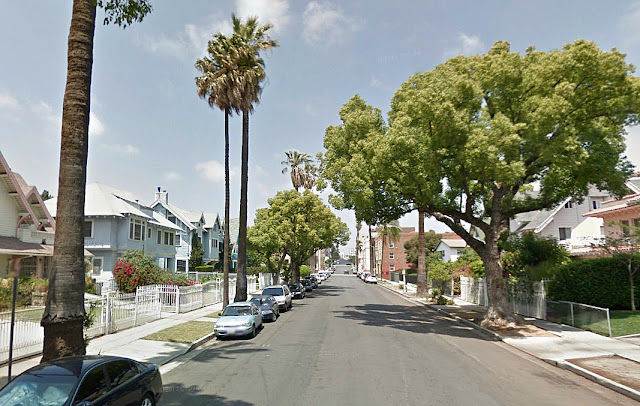 There are a few parallels, if only the slimmest, between the fictional widow of 1132 South Lake Street and the actual widow who lived there for nearly 40 years. Louise Carr was living in the house with her parents, the Larkin W. Carrs, by 1907, soon after the house was built, apparently on spec, by real estate investor Rudolph Mausard, a partner in a photo-engraving concern, on lot 11 in the new Palm Place tract; Mausard was issued a building permit—one on which no architect is specified—on April 14, 1905. After Louise married prominent Los Angeles physician (and later, an oil operator) Henry Haynes Koons in 1916 as she neared 40 and was listed on voter rolls as a "prof traveler", the couple lived not far away in their own digs for a few years before returning to Lake Street in 1921 shortly before her father died. The long parade to the graveyard continued: Louise's mother in 1927, her brother Jesse in 1928, and Dr. Koons, 10 years his wife's senior, in 1929. While Mrs. Koons was the daughter of California pioneers and the wife of another man of affairs, she, like Mrs. Hilyard, had an artistic bent—she sang. Unlike Mrs. Hilyard, she also worked tirelessly at civic affairs, for women's suffrage, and for walnuts, owning her own 45-acre walnut farm in Orange County and serving at one time on the board of the California Walnut Growers Association. The Koonses appear to never have had children, but Louise's endeavors kept her active despite being alone for years at 1132 South Lake Street. She died in Los Angeles on September 1, 1944. 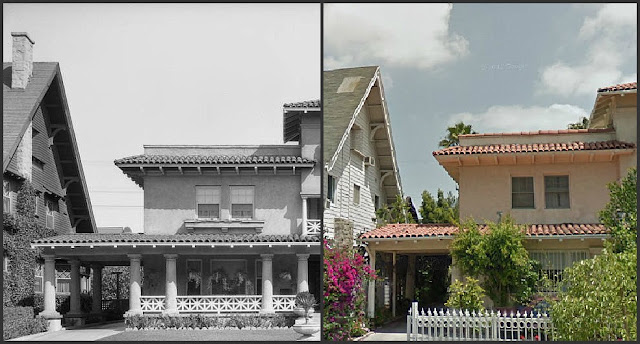