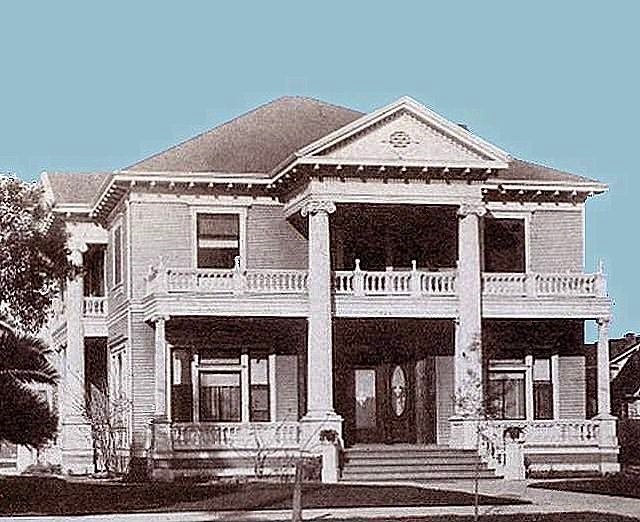 Before there was a West Adams, there was simply the Adams District. Named after one of the presidential streets south of downtown toward which the city's expanding population moved after the establishment of U.S.C. near Agricultural Park in 1880, the district originally straddled the city's official east-west demarcation at Main Street. A long stretch of cottages, with a number of much larger houses among them, went up along Adams Street toward its eastern terminus two miles from Figueroa. Adams remains a primary thoroughfare of a vast neighborhood of Victorian housing, still, fascinatingly, intact and unheralded. Once it was fully settled toward its east end, a combination of limited access to land across the Los Angeles River and the lure of the Pacific drove development west. Over the course of 40 years larger dwellings, many very grand indeed, were built all the way west along Adams to Culver City. The accepted stretches of old Adams District fashion moved rather rapidly along the Adams corridor toward Figueroa and beyond, settling in two sections of the now preferred West Adams district, one between Figueroa and Hoover, the other centered near Arlington Avenue. When the major latitudinal arteries of Los Angeles were widened and promoted in stature in the 1920s, Adams Street became Adams Boulevard. This particular upgrade was perhaps also something property owners hoped would bolster the old grandeur and help slow the decline of the neighborhoods along its route. But as the population of the city exploded during the decade and householders cashed out and moved to newer precincts to the north and west, any such hopes attendant to the promotion of street to boulevard proved to be in vain, especially after the Depression set in.


But back to the other side of Main Street for a look at our subject house: On the northeast corner of East Adams and San Pedro streets stood one of the imposing residences of the eastern reaches of the avenue, that of John Fremont Salyer, who with his older brother Alfred Mark Salyer was the proprietor of a large, well-established music emporium downtown at 353 Broadway. Well-established but short-lived: The principals of Salyer's Piano House went their separate ways at just about the same time John spent $7,000—some reports had it at $10,000—to build 705 East Adams Street in the spring of 1902, moving from a cottage nearby, one still standing at 916 East 27th Street. The real estate reportage in the Los Angeles Times on April 5, 1903, included a full account of the finished house:

"A residence has recently been erected for J. F. Slayer, on the northeast corner of Adams and San Pedro streets, after plans prepared by Architects Blackman & Gray [architects and civil engineers Charles H. E. Blackmann and Harding F. Gray of the recent partnership known as Associated Architects and Engineers], and under their supervision, which is a pretty example of colonial architecture.... It is probably one of the most handsome residences in that portion of the city, and is certainly a beautiful piece of architectural work.

"The interior decorations are very ornate and attractive. The carvings are the work of M. Guyot, an artist who has rendered into wood the designs of the architects in such a manner as to elicit the commendation of both art critics and architects.

"The building is a two-story structure with those high ceilings that are so often found in colonial dwellings. It has a south frontage of forty-three feet on Adams street, and a west frontage of sixty-one feet on San Pedro street. The principal entrance is approached by steps thirteen feet wide, that lead to a classical piazza, from which one enters a commodious reception hall, ten feet wide, through a four-foot glass-paneled door, in a casing of small columns and pilasters, with carved cornices and leaded side lights. On the right is the library, 14½x14½ feet. On the left is the music room, also 14½x14½ feet, finished in birdseye maple, with beautifully frescoed walls and ceilings. From the reception hall you pass to the grand salon, or living room, 18x36 feet, with a beamed, paneled and decorated ceiling, having carved moldings and being supported by graceful Ionic columns, that stand on suitable paneled pedestals, and are crowned with hand-carved capitals. At the end of this room is a grand colonial brick fireplace, with seats on either side.

"Opening into this is the dining-room, 15x19 feet, with woodwork stained in golden oak.

"Leading from the center of the living room is a grand staircase, with carved newel posts, quaint turned balusters, and seats on the landings. It is lighted by stained glass, and is in itself a picture that adds much to the appearance of the handsome room in which it is located.

"On the second floor is a billiard room, and four large bedrooms, besides servants' rooms, hall and bathroom.

"The building is provided with gas and electric lights, stationary marble-top wash stands, and ample linen closets. It has a large cemented cellar, that contains a heating plant.... The house was built by day labor, and cost about $10,000."

One wonders what might have caused the dissolution of the Salyer brothers' business partnership; perhaps the split was amicable, or perhaps John was given to overspending and managing his personal life in ways that did not please Alfred. In any case, Alfred proceeded forthwith to open his own operation, the Pacific Music Company, with retail and, later, piano manufacturing divisions. John's assets in Salyer's Piano House, which apparently included the real estate, were merged with the Bartlett Music Company, founded in Los Angeles in 1882; John became secretary of the new venture. When A. G. Bartlett retired in 1906, John bought him out and, while retaining the Bartlett name, became president of the firm, remaining associated with it until it closed in the 1920s.

On East Adams Street, meanwhile, things were perhaps not so rosy as they came to be down at the office. John's wife Rosa was raising the couple's two sons, Edwin and Roy, entertaining on occasion the local chapter of the United Daughters of the Confederacy (Missouri-born herself, Rosa's parents were Tennessee natives). Perhaps she was a modern woman who was happy to have her children and a lovely new house and did not ask too many questions of her husband, but could she have known that he and and a woman by the name of Byrda McGauhey (and her sister Opal) were issued U. S. passports on the same day in March 1900? The same Byrda McGauhey who was Rosa's fellow member of the DOTC? It is not know whether an elopement was planned; no international travel records or marriage followed on the heels of the issuance of the passports. Could there have been an aborted affair that led tangentially to the dissolution of Salyer's Piano House? It wouldn't at any rate be the last John and Byrda saw of each other, though he remained at 705 East Adams with Rosa for at least the rest of the decade. When a final parting came, John moved to the Jonathan Club. By 1912, Rosa was a grass widow, listed in subsequent city directories as "Rosa Salyer (widow J. F.)"—a annotation commonly used by divorcées in the Edwardian era to save face, and perhaps to subtly wish the ex dead—though in this case it would be Rosa who would be reposing at Inglewood Park by late 1918, way before John. But we digress...in the meantime, waiting like a spider for news of the divorce decree, was Byrda. She and John were married before the ink was dry. Rosa decamped for St. Andrews Place and the new Mr. and Mrs. J. F. Salyer took an apartment at the Young on South Grand; the East Adams Street house may have then been rented for several years while John and Byrda contemplated their future and that of their city. It was clear that whatever shred of fashion East Adams Street may ever have had was long gone. Los Angeles was moving inexorably west to the Pacific. If not as far north and westerly to where the newest new development was taking place—from Windsor Square and Fremont Place to Beverly Hills and beyond—the Salyers nevertheless made a big move to a district just peaking in desirability, if in the next decade to begin its decline.


Through his marriages and peregrinations, John Salyer had maintained 705 East Adams Street for nearly 20 years before moving to 2400 South Gramercy Place. It wasn't to a new house that he moved; saving on the Bekins bills and taking advantage of powerful new house-moving equipment developed during the First World War, in 1920 he—or rather Byrda, it appears—simply had 705 and its contents jacked up and transported three miles west to a section of West Adams that would maintain its cachet longer than much of the district, hard as it was by fashionable, gated Berkeley Square. On June 3, 1920, the Department of Buildings issued a permit—to Byrda—to relocate 705 East Adams to the southeast corner of Gramercy Place and 24th Street. 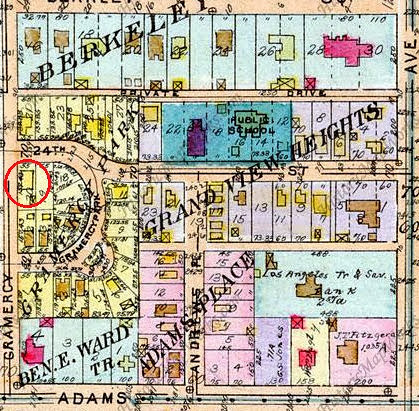 Houses of the size of 705 East Adams usually required trucking in pieces; the presumed route to its new site was west on Adams and then north two blocks to a large double lot at the southeast corner of Gramercy and 24th Street. How this might have been accomplished at a time when Adams on either side of Figueroa still had its median is unclear; one only hopes that far fewer trees were cut down for clearance than the hundreds that were removed to bring the spacecraft Endeavour through South Los Angeles in October 2012. After placement on its new foundation (or perhaps in a subsequent renovation), the house acquired a new flat roofline, though all other major elements, including columns and long oval front-door sidelights, remain. Happily for the neighborhood is that, despite the loss of Berkeley Square in its entirety, the Salyer house remains standing and has recently been restored. 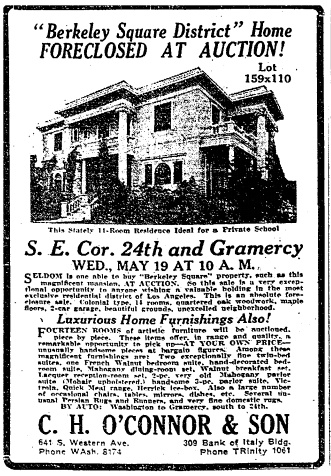 John and Byrda Salyer stayed in their relocated house for only a few years. By 1924 the couple had decamped to San Gabriel, with 2400 South Gramercy apparently passing into new hands. It could be that the Salyers had overextended themselves with the move (not to mention a trip to Hawaii in 1924). In May of that year, a picture of the house appeared in Los Angeles Times foreclosure-auction advertisements featuring furnishings that might have been old Salyer possessions in place since Adams Street. At any rate, it is curious to note that John and Byrda Salyer were later to be found living back at 705 East Adams in a two-family building with which, having retained the lot, they had replaced the mobile house in 1923. Byrda was listed at 705 as late as 1936; the lot now holds only cinder blocks, asphalt, and discarded mattresses. Gramercy Place south of the 10 has hung on in a fitfully gentrifying state since the trauma of the freeway's invasion 50 years ago and in the wake of the grandees of West Adams, long since moved on to Windsor Square, Hancock Park, Pasadena, Beverly Hills and the Westside.