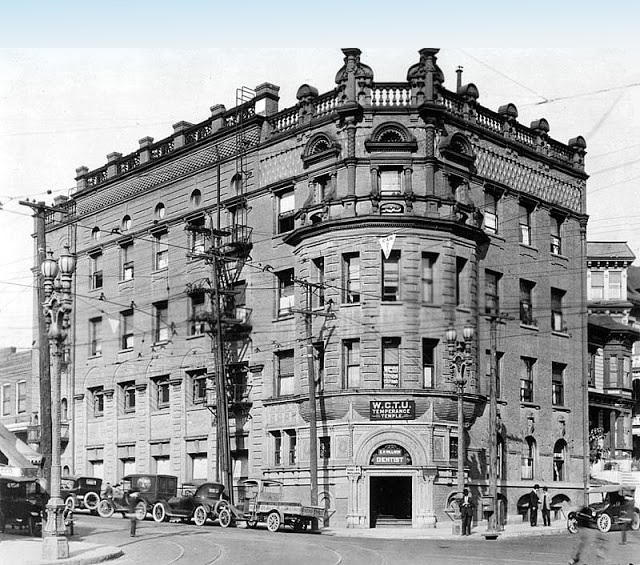 
While its zeal is impressive, its attempts to deny human nature and to assume that it knows best might suggest to some an inability to understand the consequences of repression...or it might suggest plain simplemindedness. Yet somehow the Woman's Christian Temperence Union actually still exists in an age of more independent women, even if it is best remembered for working from its beginnings in 1873 to bring about Prohibition and the unintended consequence of Capone-era crime. Such draconian denial of pleasure is now inconceivable in large part due to it being better understood, particularly by intelligent parents of teenagers, that prohibiting anything is a sure way to promote a desire for what is being prohibited. Still, all in all, an "A" for effort to the ladies in pushing their cause in a time of their being entirely dependent on men for their well-being.


And another "A" to the ladies for their attempts to preserve the actually quite immodest headquarters—immodest at least as it was built in 1889—of their Los Angeles chapter. A five-story sandstone-and-brick fortress once on the northwest corner of Temple and Broadway, the building began, symbolically enough, to wither as Prohibition waned. The city exercised eminent domain twice in the '20s, first taking 10 feet from the Broadway side of the W.C.T.U.'s property and then 12½ feet from the Temple side a few years later. Rather than knock down the whole adored shrine to repression, the ladies literally shrank the building by slicing a 12-foot, 4-inch section parallel to Temple and pushing back the south façade to meet the north side that had remained in place. (Well, the ladies themselves didn't do the pushing—they hired the renown Kress House Moving Company to do the job.)

Seemingly all ready for the next W.C.T.U. crusade in its new size, the building suffered another blow in the form of effects of the Long Beach earthquake in 1933, the same year the organization itself suffered repudiation in the form of Repeal. Photographs of the structure from the late '20s and early '30s have proven elusive, but the post-temblor building, much whittled down and stripped of detail, was no more giving up than the Mrs. Grundys who perpetuated it along with their cause. The end finally did come in the late '40s when the entire corner was taken by the county for a central heating plant. 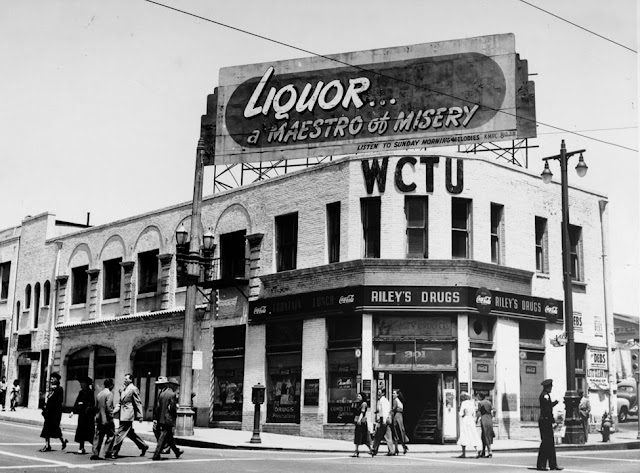 1950: Moments from final demolition. The girls really should have
fired whoever came up with "A Maestro of Misery."
Alliterative, but possibly inane.

Down, demolished, flattened was the building...but not so the ladies. The gals did what downtown dwellers in Los Angeles had always done—they moved west, in their case to a big flamboyant South Kingsley Drive Victorian/Craftsman house in a residential neighborhood going commercial, its residents in turn moving as ever westward in the city. Surprise! Now in some ways more pragmatic if still leaning toward the anhedonic, the W.C.T.U. remains in its house on South Kingsley 62 later. Its headquarters have now been there longer than they were in its first home at Broadway and Temple. 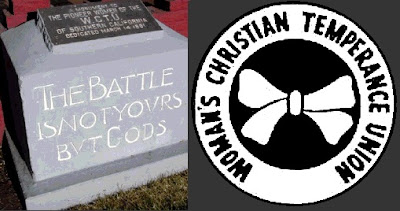 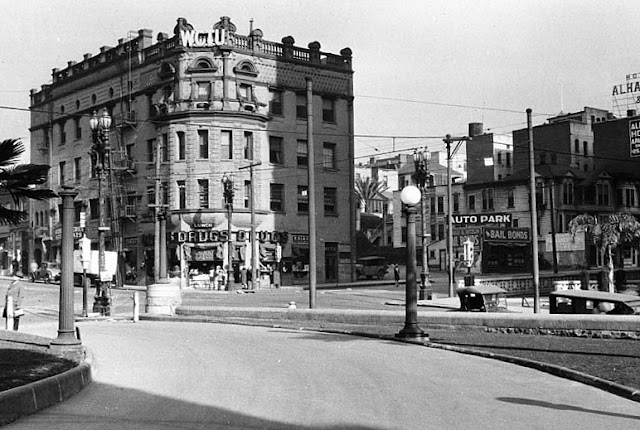 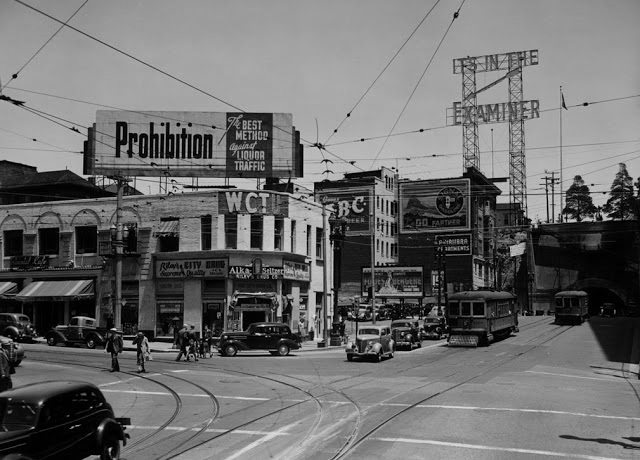 Circa 1930 and circa 1940: The effects of Repeal and an earthquake.
The Alhambra Hotel/Apartments appears in both shots above—
its twin across Broadway was another downtown building
moved by the Kress House Moving Company, in its
case to make room for the 1925 Hall of Justice.