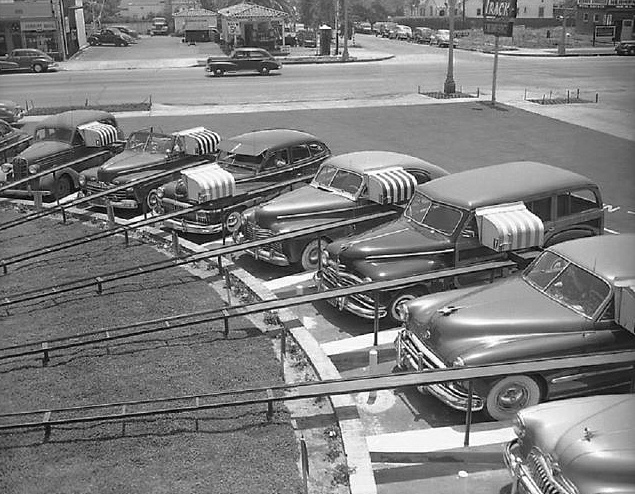 What could go wrong? One of the most intriguing L.A. architectural novelties we've ever seen was this take on the drive-in. It's The Track, with "Motormat" technology, "Track" apparently a reference to racetrack—hence the striped service trolleys that were sent out to cars at 120 feet per minute, each unit named after a famous racehorse. A theme, however, was not enough in the face of Rube Goldberg technology. You just know the crazy trolley system must have hit snags constantly, with burgers and fries and chicken wings and cokes flying all over the hoods of Hudsons and DeSotos...and yet at one time there seems to have been as many as three outlets in the Los Angeles area, for however long they lasted. Here's a description of the operation from The American Drive-In, by Michael Karl Witzel:

"Debuted in 1949, a Los Angeles innovation promised total elimination of carhops. At a new drive-in called "The Track," it attracted customers from as far as Santa Monica with its unique type of service. Like a group of horses at a trough [there's a gracious image], cars ringed around a central building, forming a circular pattern. Twenty semicircular parking spaces bridged a center kitchen by means of metal tracks. Food and condiments rode the rails within carrying...compartment[s] each powered by a small ½-horsepower motor.... The mechanical setup was reminiscent of the wackiest Rube Goldberg device. Positioned in a pre-determined [?] parking space, the diner rolled down the car window and was greeted by a stainless-steel bin that could be made flush with the door. Inside the box were plastic cups, a water bottle, menu, order pad, and change tray. It was large, too. Food for six people could be ferried back and forth on the elevated platforms. Patrons would jot down their orders and with the push of a button, the unit scooted a return to the kitchen.... When the empty bin arrived at the kitchen, an attendant put through the order and added up the bill. As hamburgers and other entrées were prepared, the rail box made its second journey to the automobile to collect the money. By the time it returned to the preparation area, the food was ready to go—loaded into the compartment along with condiments and the customer's change. According to inventor Kenneth C. Purdy, the spoke-and-wheel-track arrangement sped service 20-25 percent."


Well, needless to say, we wanted to know where this madcap drive-in was. There was a 1951 phone-book listing for a "The Track No 3" at 3816 Sepulveda Boulevard in Culver City, now the site of a Carl Jr's, but current visual cues there don't jive with the vintage shots seen here. So we squinted at the pics, especially the one at top, and decided that the sign on the Herman-Something real estate office must have said "Herman Shrager"—who, it turns out, dealt in cemetery real estate, as in plots. Anyway, after more digging we found that Herman had an office at 8152 Beverly Boulevard...and eureka! It all fell into place. Across from Herman's one-time haunt, at the northwest corner of Beverly and Kilkea Drive, the distinctive Welch's Candy building still stands...and so across Kilkea from Welch's would have been The Track, at 8123 Beverly. The mini-chain's other locations may have survived longer, but with maintenance obviously a nightmare and profits hindered with what was clearly too much real estate given over to servicing too few cars, it was all over in a few years. Advertisements for an auction of the pieces of The Track appeared in the Times in February 1952. 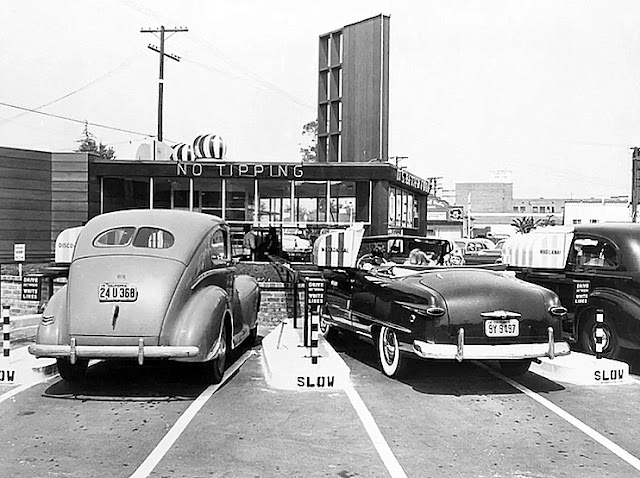 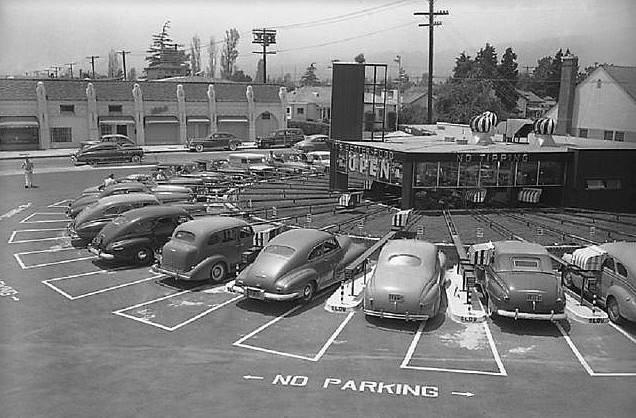 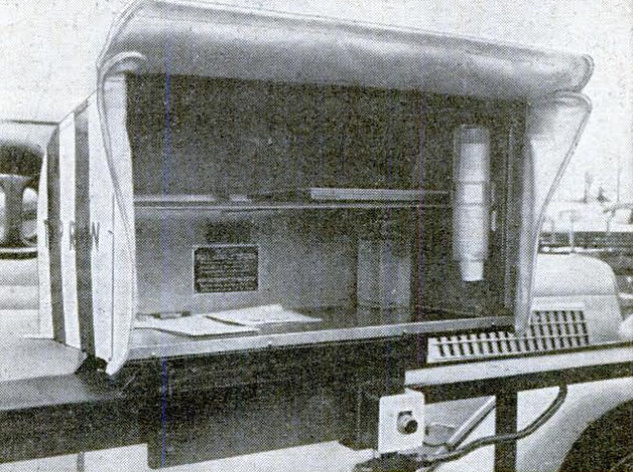 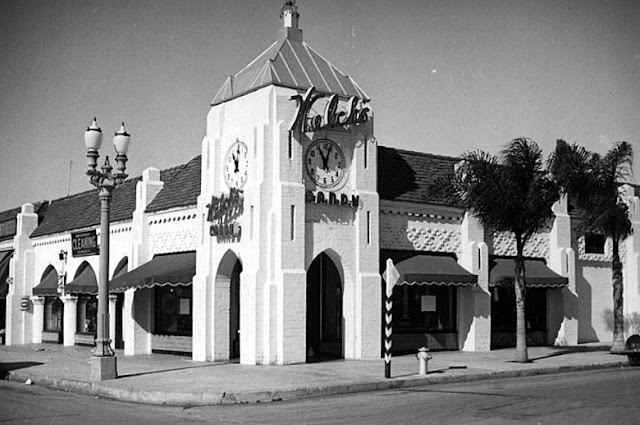