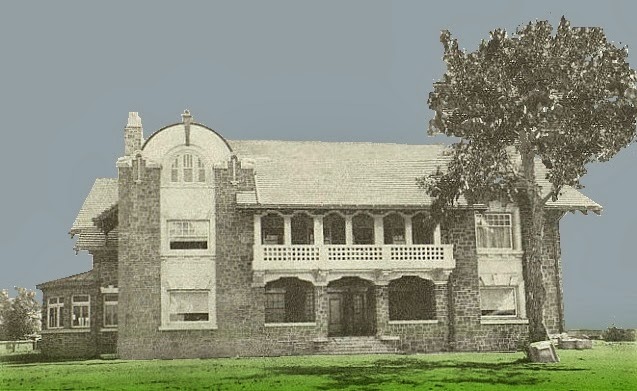 In addition to his interesting, alliterative, practically marketable name, Lycurgus Lindsay was one of the Big Swinging Dicks of the developing American West, a bumptious man of appetites and drive who nevertheless built one of the most delicate yet robustly designed houses ever seen in Los Angeles. Not content to live in just another example of the cookie-cutter-common Craftsman-on-steroids or overblown gabled English cottages fast becoming ubiquitous among affluent Angelenos, Lindsay took time away from his life as a hard-driving businessman to consider personal aesthetics when it came time to build a home for his family. A survivor though now obscure, the result was singular in Los Angeles, recalling the shapes of Sullivan and Wright. Also unusual was the material of which it was built: "Hard-burned" terra-cotta tile added to the sense of the Lindsay house as something both powerfully built and delicate—perhaps much like the man himself.


Born in northern Missouri in 1859 and taken to Sonoma County at the age of two, Lindsay's youth was spent ranging the western half of the country where he came to understand the riches that could be taken from it through husbandry and extraction. His first endeavors involved grain and cattle; he maintained interests in the latter on a grand scale even as he later became known more for his vast mining operations in the southwest and in Mexico. After centralizing his business enterprises in Los Angeles around 1905, he energetically expanded his efforts to include large stakeholdings and directorships in banks, oceanfront real estate development, and in building materials, germane to our story here.


Lycurgus Lindsay's local business interests included firms that produced miles of the sewer pipe new Angelenos would require, but, as mentioned, his passion for business did not exclude aesthetics—he also gained control of the Western Art Tile Works around the time he settled in Los Angeles, for the time being moving into 935 Grand View Street in the Westlake district. While there, he made plans for a new and quite innovative house to be built in what was developing into something of a neighborhood of in-town estates far out on Adams Street (now Boulevard). While early reports in the August 1907 issue of the Western Architect and Engineer and in the Los Angeles Times (including an extensive piece that appeared on January 31, 1909) cite the in-demand local firm of Hudson & Munsell as the designer, with Western Tile in charge of the actual building, there seems to be a consensus among later sources that Lindsay may have instead engaged the services of Charles F. Whittlesey, an architect whose imagination might have made the best use of the products of Western Art to create a bold domestic statement. Perhaps there is a chance that David Gebhard and Robert Winter, in their 2003 An Architectural Guidebook to Los Angeles, have confused the provenance of the Granville Hayes house, up the street at 3300, which Whittlesey did design, with that of Lindsay's. But, given that Whittlesey had at one time been a protégé of the artistically inspiring Louis Sullivan, as was Frank Lloyd Wright, it would seem that he might indeed be a better fit as the designer of 3424 West Adams. The house he may then have designed for Lindsay there has long been noticed for its eccentric Vienna Secessionist styling, which, though unfortunately encumbered by the detritus of a modern church in its front yard, becomes, the more closely one looks at it, a work of art. (Please, Our Lady of The Bright Mount, wake up to the beauty you possess!) While the house's original building permit appears to be unavailable—it might indicate the architect and other particulars—the date most often given for the Lycurgus Lindsay house is 1908, which appears to be the year construction began. (At top is a photograph of the house in its final stages of building.) Lindsay—who, by the way, despite its charm to us today, is said to have not been fond of his Greek first name, preferring "L. Lindsay"—is noted in city directories from 1905 to 1909 as living on Grand View Street before being listed at 2610 West Adams from 1910 to 1913—"2610" being the new house's original designation before Los Angeles's 1912 house renumbering program implemented to accommodate annexations. 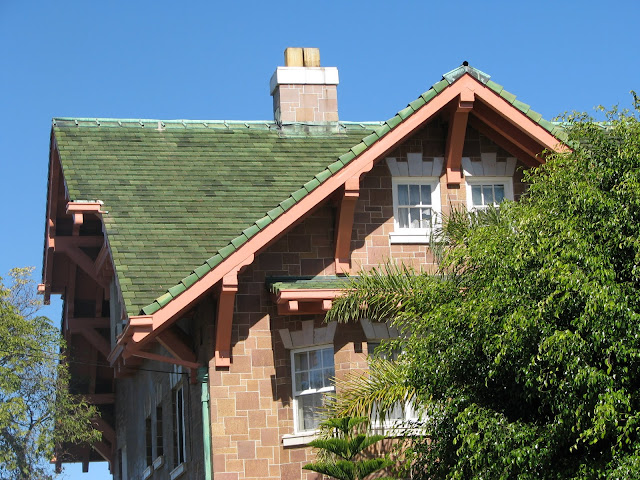 While there are the indications that the Lindsay commission was first given to Hudson & Munsell before possibly being offered to Whittlesey, the choice of the latter, given his training, may make all the more sense given its unique features as explained in the accompanying article from the American Carpenter and Builder of October 1, 1913, features that would seem to require more imagination as well as more time for fabrication than ordinary balloon-frame construction. Perhaps too, in the aftermath of the San Francisco earthquake and fire, Lindsay decided he wanted something other than what may have been a conventional wooden design offered by Messrs Hudson and Munsell. At any rate, whoever may have been the actual architect and however well Our Lady of The Bright Mount maintains it, the Lindsay house, (possibly) one of the few Whittlesey creations still standing, should be celebrated. Would anyone care to contribute to a letter-writing campaign asking Our Lady to tear down that breezeway...if not its sanctuary?


Construction and interior details of the Lycurgus Lindsay house are revealed in the full text of the aforementioned article appearing in American Carpenter and Builder in October 1913:

"One of the most unique and thoroughly fireproof dwellings in the southwest has just been built on the outskirts of Los Angeles., by L. Lindsay. The house is built entirely of hard burned terra cotta tile.

"This house and grounds stand prominently to the front as a model of the true California home. When it is said that the grounds are 250 by 700 feet in dimensions, it is easy to see that there are bound to be unique features about them. There is; the land slopes back from the street front, down quite a sharp hill side. In order to make the most of the site, the owner has had the slope terraced, with heavy retaining walls built. There is a succession of three terraces, and then a gently sloping stretch to the rear street. One retaining wall is eighteen feet high.

"The interior is a marvel of harmony. fine selected quarter-grain oak and Peruvian mahogany having been used throughout. There are just six rooms on the lower floor, but they are rooms. Some are almost as large as the ordinary dwelling. Entering from a side porch ones goes into a reception hall of generous size. The most striking feature is a huge art-glass window, immediately to the south, through which the sunlight gleams and show up the delicate colors of the glass work. A waterfall scene is the central feature, with panels on either side of kindred subjects. To get the effect desired, there are as many as seven thicknesses of glass over some parts.

"The stairway to the upper floor also springs from this hall, the art-glass windows being on a landing a few feet above the first floor level. There is a commodious living room, with a huge fire-place, to the left of the reception hall, and beyond on the east side of the house is the conservatory. This is a sunny room, with leaded-glass windows, and a deep tile-lined trough around the sides for plants. This room is finished in beautiful green and brown glazed tile.

"The dining room opens from the living room, to the south, and is a pleasant, well-lighted place finished in dark Peruvian mahogany. The service portion is to the rear, with commodious kitchen, pantry and butler's pantry all finished in white glazed tile and hard cement plaster, which is laid on the inner faces of the first wall tiles.

"There are five large, pleasant chambers on the upper floor, practically all intercommunicating, as well as having access to the large second-story hall. The finish, with the exception of the hall, is in an ivory enamel. The hall is quartered oak.

"On the third floor, or attic, is another set of apartments, for the servants. This very complete, with baths, and pleasant, sunny rooms. A hall about 60 feet long, is a feature of the attic story, and furnished plenty of room for entertainments, such as dancing.

"Another feature not mentioned in the construction is that it is practically earthquake-proof. A house of similar nature passed through the recent horrible seismic disturbance of Southern Italy and is still in as good shape as when first built. It is constructed of hard burned hollow tile, laid up in cement mortar, and reinforced every two or three tiers of the tiles with a webbing of steel wire mesh. This makes the mass practically a unit, able to resist the pull and bend of the earthquake. A similar method has been employed in building the Lindsay residence, not only in the house, but the retaining walls and all other work."