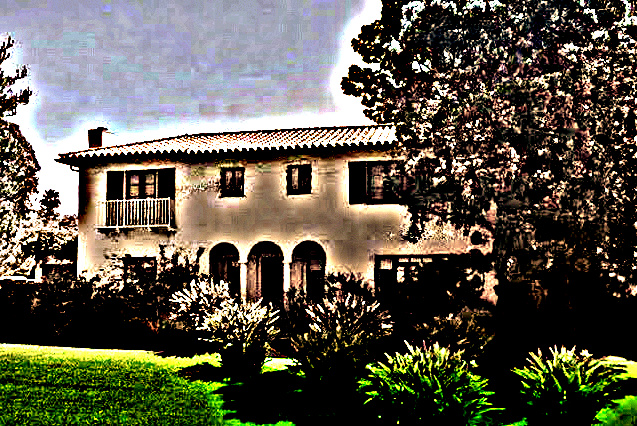 
If we were inclined to amp up our backlot-spawned fantasies of living on a street out of Our Town, Leave It to Beaver, or Shadow of a Doubt, the house we'd choose would be the one built in 1925 at 904 North Rexford Drive in Beverly Hills. The distinctions of snobbery are no less real in that lovely town than in Grover's Corners, Mayfield, or Santa Rosa, but our desire to live in it has nothing to do with 904's socially superior location in the 'Hills, above Sunset Boulevard no less. Neither does it have anything to do with its architecture; there are certainly hundreds of such commodious Mediterranean pastiches in various glamorous precincts of Los Angeles, and it has never really been a style we've been attracted to unless a definitive Coate, Neff, or Smith creation. In our Southern hometown, such designs were in the newer, tackier suburbs (not that we would ever make such undemocratic distinctions, mind you). But this upper-middle-class Angeleno mini-palazzo is different: At this writing, 904 North Rexford Drive has remained basically untouched for 87 years, making it practically a mirage in Los Angeles. Only recently and reluctantly was the house abandoned by the 101-year-old daughter of the man who built it when she was called to a more conventional kind of heavenly rest from her bed at 904 on November 9, 2011.

Kansas City real estate developer George Francis Winter and his family began spending time in Southern California before the turn of the 20th century, frequenting Catalina and renting houses on the mainland, first in Pasadena and then in Los Angeles's fashionable West Adams district. Canadian-born Winter had been in Kansas City since 1879; in January 1904, once he retired from his firm, G. F. & R. L. Winter, the partnership he'd formed in 1884 with his brother, Robert, and as their son, Frank, was finishing his studies at Stanford and U.S.C., George and Eliza Winter began planning a permanent move to California; they would put down serious roots by building 3320 West Adams Boulevard in 1908. Frank would be the youthful energy behind a new family real estate partnership, this one of father and son and on the west coast, when he joined George in the Winter Investment Company. In a quiet ceremony at her parents' home at 1141 West Adams Street on June 18, 1908, Frank Cook Winter married doctor's daughter Florence E. Miller; they too would choose the developing western part of the West Adams district to set up housekeeping. The Frank Winters would live in at least two houses on Third Avenue, both now under the 10 freeway. There would never be a sketchy 'hood for the Winters clan.

As chronicled here, changes in West Adams demographics were underway by the mid '20s, with the area now fully developed. A real estate speculator like Frank Winter would have understood before most people that West Adams's day was done and the domestic future of affluent Angelenos lay to the north and west, in Windsor Square, Hancock Park, and in even newer western suburbs. He commissioned one of the favored Los Angeles architects of the era practiced in the Mediterranean vernacular, Raymond J. Kieffer, to build a restrained four-bedroom, four-bath house in the style on Rexford Drive. His choice of Beverly Hills over the more restrictive new developments along Wilshire Boulevard was no doubt calculated in terms of property value, as was his buying a lot there safely north of Sunset. 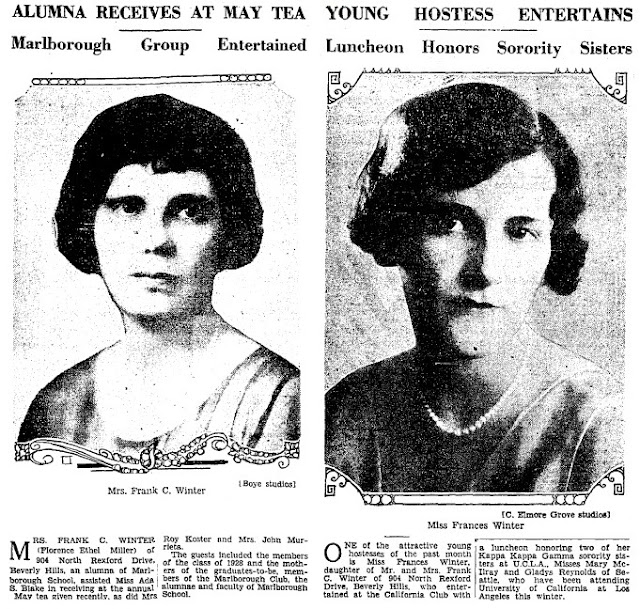 Mother and daughter: Where are the smiles? Nearly identical
Los Angeles Times photographs from May 20, 1928,
and June 21, 1931. Frances has just turned 21.

Records concerning the offspring of Frank and Florence are at first glance somewhat fuzzy. Their daughter Frances, for instance, elsewhere reported as having been born to them on June 6, 1910, is missing from the federal census of the Winter household at 2221 Third Avenue taken in January 1920, while a son named George W. Winter, age five, is enumerated. Born on May 1, 1914, young George died on January 15, 1922, after being struck by an automobile near home, which was at this time 2330 West 21st Street (a 1906 Hunt & Eager design demolished in 1962). Fifteen years old when the family moved to Beverly Hills three years later, Frances Winter was graduated from Marlborough, a few miles to the east of Rexford Drive; afterward she matriculated at U.C.L.A. a few miles to the west and, getting out of town for a bit, at the University of Washington, earning a degree in psychology. To confirm her status as a daughter of the upper reaches of the haute bourgeoisie, she pledged no less of a college sorority than Kappa Kappa Gamma, the famously orgulous breeding ground of debutantes and Junior Leaguers. One might speculate as to the family life of the Winters and the sadness over a lost son. Was Frances kept close to home, even after college, as a result of this loss? There were many family trips, including annual voyages to Hawaii, sometimes on the Lurline, and to New York—interestingly, sometimes also by sea through the Panama Canal. Later there was a weekend house in Palm Springs. When at home in Beverly Hills, Frances, like her mother, participated in the genteel, little-white-glove social activities of ladies of her era and station. No shut-in, she also enjoyed games of tennis at the Los Angeles Country Club, in which she maintained a membership along with one at the Beach Club in Santa Monica. She played bridge enthusiastically, bringing similar energy to the cultivation of her rose garden and to the care of her dogs. There was also the careful tending of what seems to be the original decoration of 904, even down to specific paint colors.

Frank Winter died at 904 North Rexford Drive in 1962, age 80; Florence lived to the age of 100, expiring in Los Angeles on March 9, 1984. Frances was then alone in the amber of the lovely Winter house for another 27 years. What changes will now come to the house? Preservation seems unlikely; considering the taste level of modern Beverly Hills, one shudders to think of the excruciating excess a remodeling or replacement might entail. Avert your eyes, Frances. 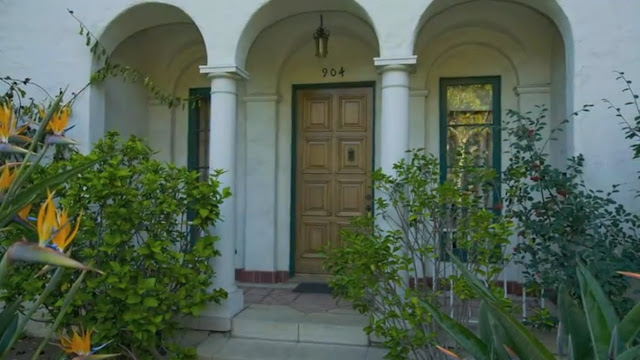 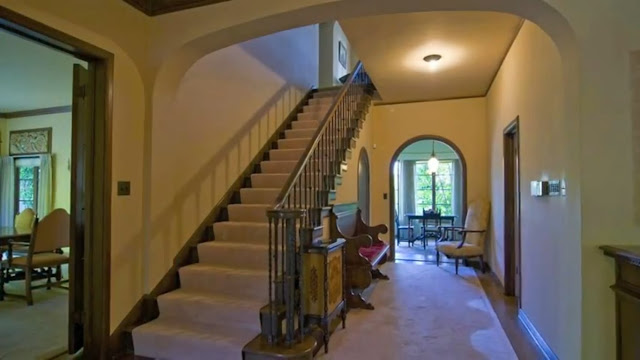 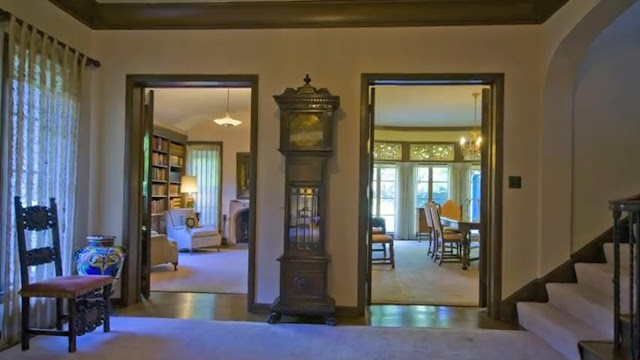 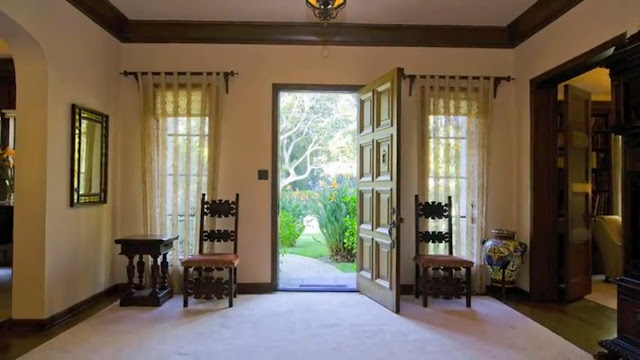 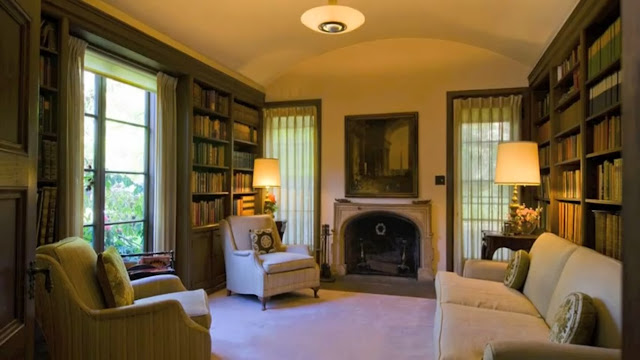 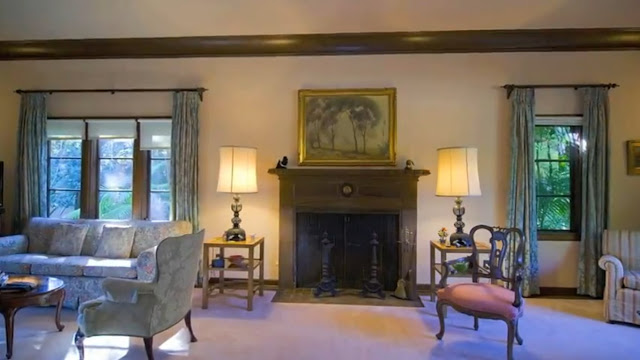 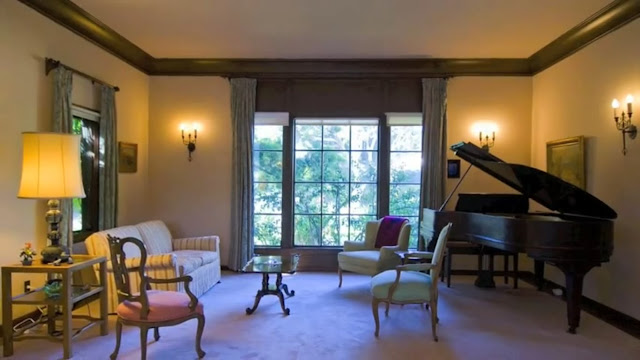 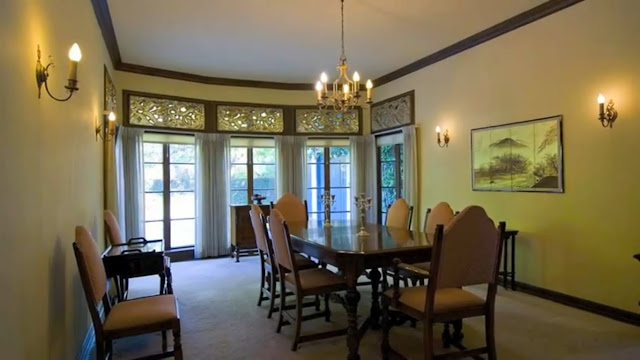 The dining room, utterly conventional except for the carved alabaster screens above the windows 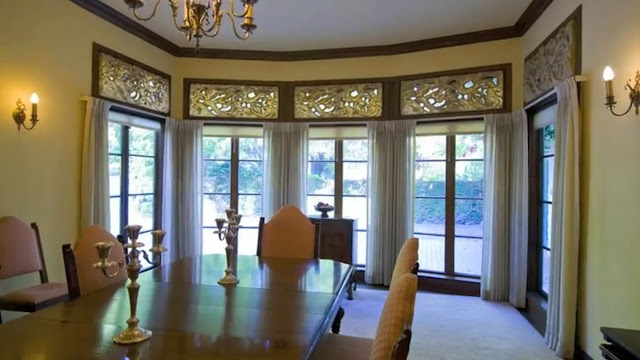 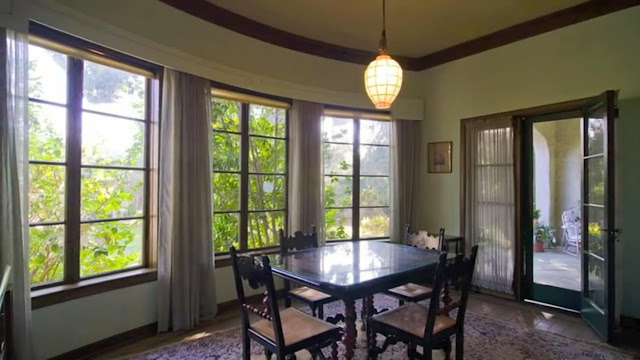 In truth, no photographs of the kitchen of 904 have surfaced. But we
would like to imagine that it is a plain affair, meant mostly
for serviceability—and servants. There is a big porcelain
O'Keefe & Merritt range, made in Los Angeles, and
the latest thing—a new Frigidaire. 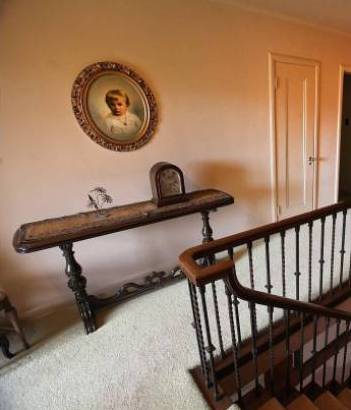 Still life: Frances with Clock. Or is that young George? The frozen-in-1925 look
of 904 comes not only from the department-store suites of furniture, but
from the classic period matte beiges and corals, pale yellows and
greens on the walls. Full of lead, no doubt, but peaceful. 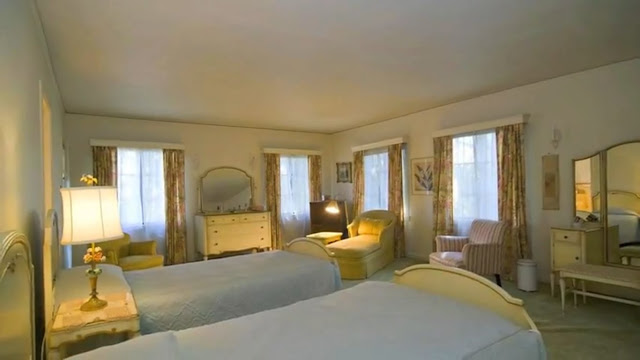 A lovely lemony bedroom...about as colorful as the Winters would have it. The furniture in all
rooms of the house appears as though it could be from Beverly Hills's own W. &. J. Sloane. 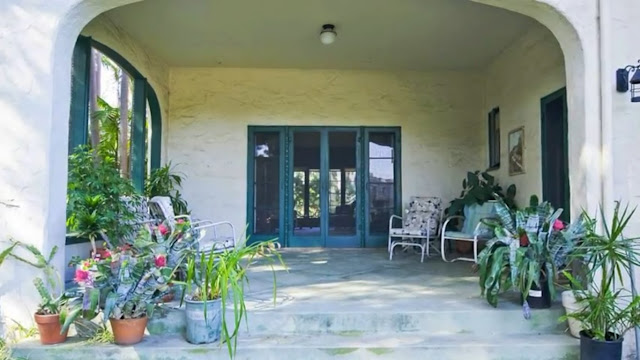 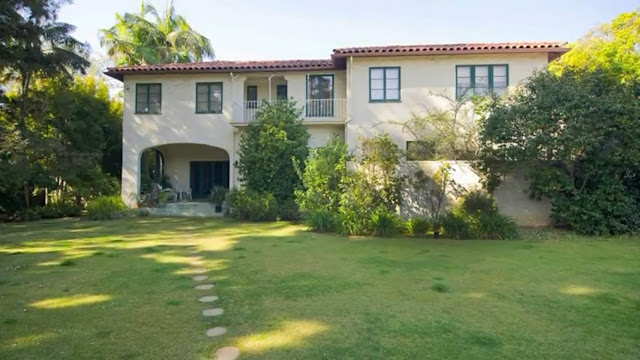 Out back, stepping stones lead to a long-disused tennis court. There is
no pool. (Even the much grander Jenkins house in Windsor Square
was pool-less; its use in Sunset Boulevard, and later in Rebel
Without a Cause, required that one be dug.) Contrary to
popular perception, early Beverly Hills wasn't all
nouveau riche movie folk. While luxury is
certainly relative, the town's large
contingent of haute bourgeois
former West Adamsites
valued quality over
extravagance.

The drawing of the Winter house
above appeared among a collection under the
headline "Why Southland Homes Are Known Throughout
the Country as Finest: Architectural Gems in Design" in the
March 29, 1925, issue of the Los Angeles Times. Below are images
taken in May 2011 and July 2016, respectively; mercifully, the
only exterior change appears to be the substitution of a
satellite dish for an antenna. Initially offered at
$5,500,000, the Winter house was sold for
$5,700,000 on April 27, 2012. 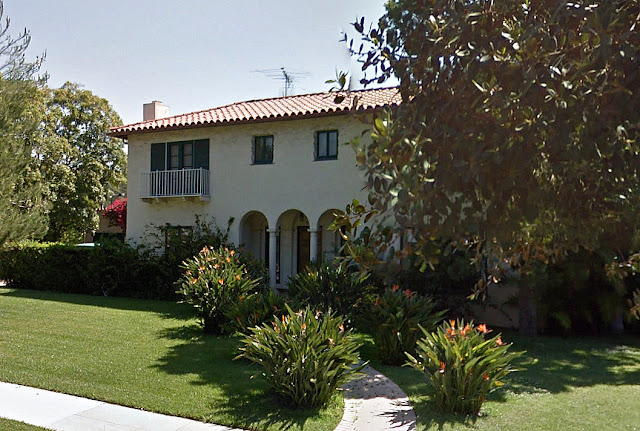 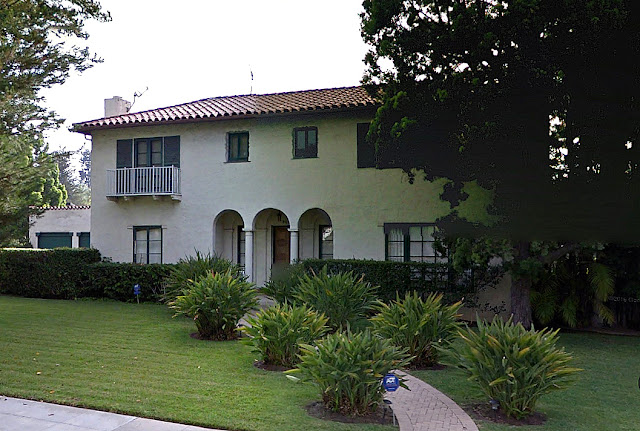