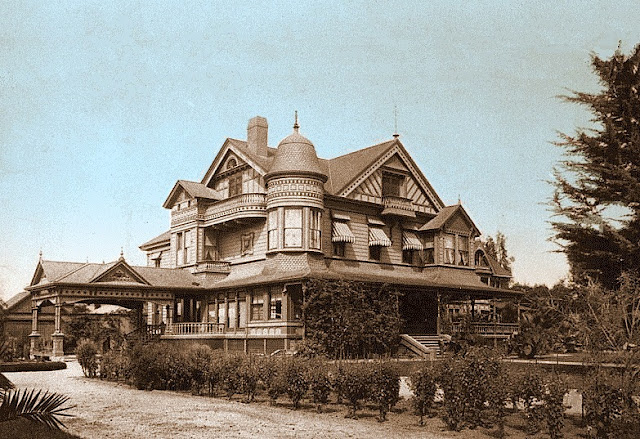 
While details as to architect and builder remain elusive, widowed banker George Henry Bonebrake appears to have completed and moved into his rambling new house on Figueroa Street, between Adams and West 27th, in the first half of 1890; newspaper reports of his family's social engagements early that year—those of his daughter Blanche, in particular—place the Bonebrakes at 1610 South Figueroa, while those of midsummer, including news of Blanche's lavish coming-out party on July 1, have them in residence 10 blocks south at 2619. After Blanche was married to druggist John W. A. Off in the house on January 1, 1892, the couple moved in while the residence Mr. Bonebrake was giving them as a wedding present was being completed next door at 2625 South Figueroa. (The new son-in-law was apparently expected to accept the gift with equanimity; he would soon, perhaps also more in keeping with his father-in-law's expectations, become a banker.) 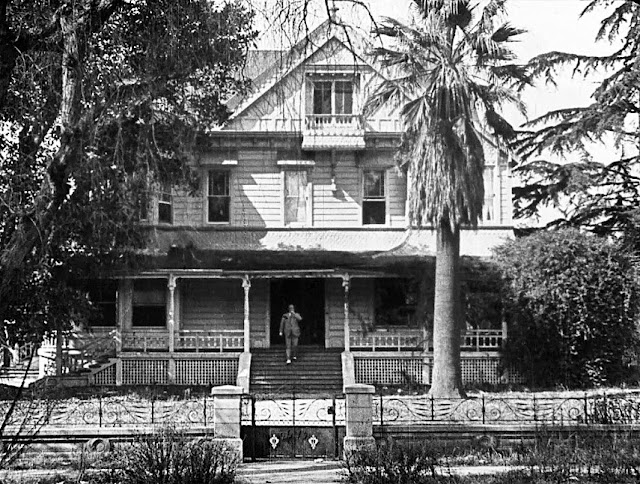 George Bonebrake died at 2619 on October 30, 1898, after a struggle with Bright's disease. The Offs had leased their house the year before and moved into 2619, and would remain there until the fall of 1902, when the house, along with the one next door at 2601 South Figueroa (then owned by real estate operator William Botsford and seen hiding behind the right side of 2619 in the image at top), was acquired by the notorious, newly married Arkansas politician Stephen W. Dorsey, who had arrived in Los Angeles in 1898. Senator Dorsey's bride was Laura Bigelow, 20 or so years his junior; the combination of an attractive new wife and a big house were apparently the key to becoming a respectable member of polite society in the still-dusty L.A. of the aughts—despite not only his shady past back in the Ozarks and Washington, but the claim, within days of his marriage to Laura in New York on July 7, 1902, of his secretary, grass widow Harriet Joralemon, that she and the senator had been shacking up in a house he'd bought her on West 22nd Street. (It seems that Mrs. Joralemon may have been paid off, disappearing from the scene within a few weeks.) Before 1910 the undaunted and ambitious Dorseys would raise the profile of 2619 by in effect making it the corner house at the southwest of the intersection of Figueroa and Adams—equally prestigious thoroughfares—moving 2601, it appears, to the rear of its lot and turning it to face north, where it henceforth assumed the address of 630 West Adams Street.

After 13 years as a social dreadnought at 2619, Laura Dorsey died there on July 9, 1915. Then the shadow over her husband reappeared when the bank, foreclosing on his mortgage, ordered a series of auctions of the contents of the house, held in January 1916. Dorsey, having been ill for some time, was living in a modest bungalow (still) at 2222 West 28th Street when he died on March 20, 1916.

Kathryn Montreville Cocke opened a music school at 2619 that year; it was gone by the time the property was acquired by the Automobile Club of Southern California in 1920. The Department of Buildings issued a demolition permit for 2619 on November 12 of that year; on June 26, 1921, the Times ran an article announcing the club's plans for an elaborate new building on the corner, one proclaiming the preeminence of the automobile in the city as well as the twilight of residential Figueroa Street.