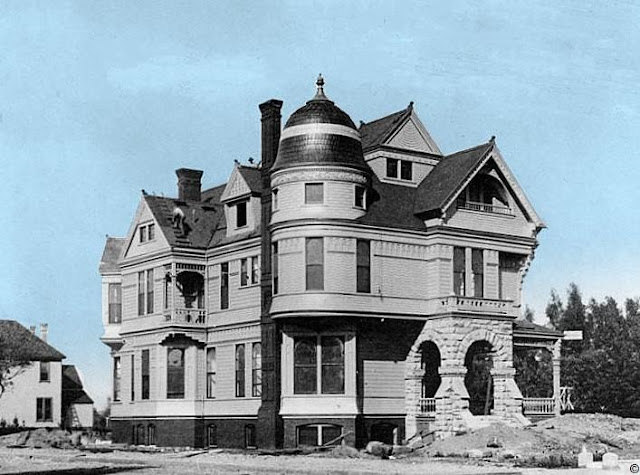 
Jacob Loew arrived in Southern California in the early 1870s, first trying his hand at raising sheep in Downey. Ten years on, his stock began to die, its drinking water poisoned by petroleum seeping from underground. Having lost a potential fortune by the time he realized it many years later, all was not lost: Loew had enough cash to buy the Capitol Milling Company and the sagacity to marry the daughter of well-connected businessman Harris Newmark, both of which proved to be successful ventures. Within two years of their wedding, the Loews had bought a lot on the moment's prime residential boulevard and began planning to build to Joseph Cather Newsom's blueprints one of the architect's signature beasts of a house. They moved into 1417 South Figueroa Street—seen here nearing completion—in 1888. With Loew on top of the latest technology, Capitol Milling proved to be a great success; the business would continue in family hands long after he shot himself in his office in April 1921. After a demolition permit was issued to its then-owner Mary Costello on August 15, 1923, the house was, unfortunately, torn down before the exhuberance of Victorian architecture came to be appreciated. A showroom for J. V. Baldwin Chevrolet was completed on the lot the next year; the Los Angeles Convention Center now covers the site.