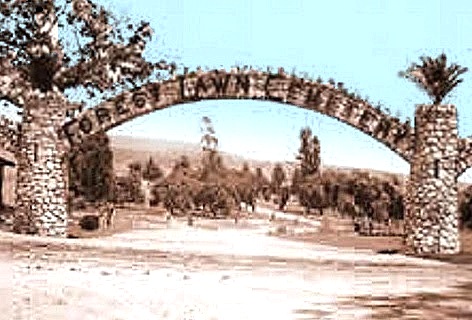 Forest Lawn, Before the Kitsch

There was a time when the idea of eternal rest in Los Angeles meant something bucolic and restful and also natural, not something to be flocked in storybook treacle and marketed as natural. But capitalism is destined to leave no stone, or in this case, concretion of cobblestones, unexploited, and so down the garden path we would go to The American Way of Death, Jessica Mitford's great 1963 funeral-industry exposé. 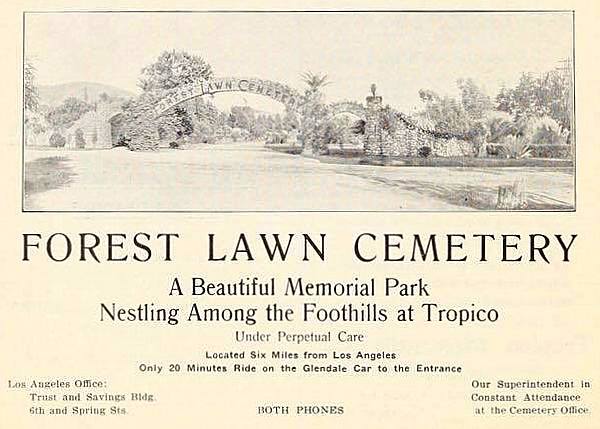 The town of Tropico was laid out in 1887, six miles north of downtown Los Angeles, reachable in twenty minutes after trolley service was eventually inaugurated. In what is now the southern part of Glendale (to which Tropico would be annexed in 1918), strawberries were raised, a basket factory and the Western Art Tile Works were established. In 1906 a lovely place of rest was set aside, a simple, graceful arch of arroyo stone marking its entrance. Along about 1912, the very entrepreneurial Hubert Eaton, spying real estate gold inside Forest Lawn's gate in the form of the tiny lots to which Tropico's dead had retreated, contracted with the cemetery's owners to sell plots on a "pre-need" basis. No more of this rushing around to find a place to deposit Grandpa on the day he died. By 1917 Eaton was general manager of the graveyard, and euphemisms began. The cemetery was now to be known as Forest Lawn Memorial Park, and Eaton promoted all kinds of high-minded sentiment to sell the place as a community asset. And, of course, there's always money to be made in grief. Anyone who has ever made plans for a family member's burial at a mortuary—probably a verboten word—can attest to the often hilarious lengths to which morticians will go to pad the bill to create spectacle. A release of pink doves? Skywriting? A woman in black veils to stand mysteriously under a tree in the background? All the new features of the ramped-up Forest Lawn Cemetery Memorial Park, now kitschy and grand, were expensive, but what kind of person would want to keep it simple?

Somewhere along the line, before the amusing nomenclature that inspired Evelyn Waugh and the writers of Six Feet Under, there was really only the stone arch and the tombstones. But the shift was underway—the arch itself would be shifted by gifted Los Angeles house mover George R. Kress to adjust for a road realignment, as seen in the July 1, 1916, issue of the trade journal American Carpenter and Builder (below). The pretty structure with a dragon profile is gone now, replaced with less humble gates, knockoffs of those of the 15th Marquess of Schenectady. It's a Mardi Gras L.A. now. 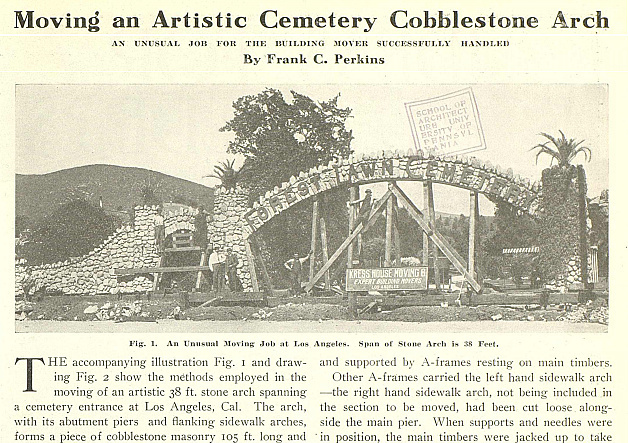 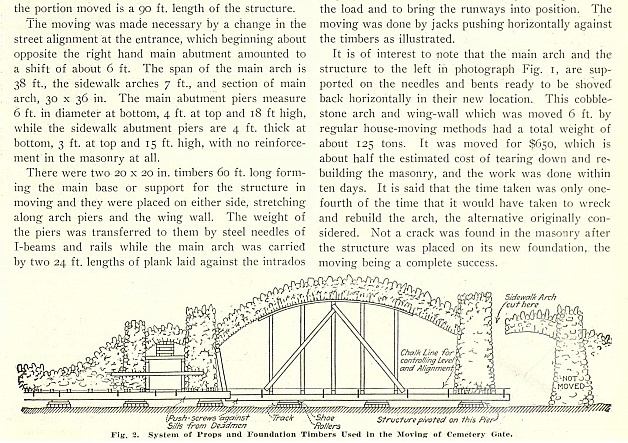