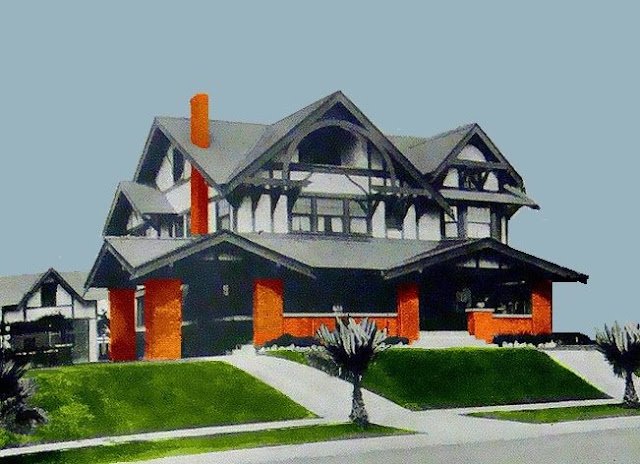 Indiana native Joseph M. Overell came west with the 20th century, arriving in Los Angeles from Evansville in 1898 after a successful career as a building contractor, architect, and planing-mill owner. With an affinity for wood, he opened a Spring Street furniture emporium in partnership with George L. Louden and, a few years later, a store of his own, the instantly booming J. M. Overell Furniture Company. Joe worked hard pushing davenports, breakfronts, and canterburies out the doors of his showroom on downtown's Furniture Row; he also worked hard at making sure that those buying from him on the installment plan didn't enjoy their parlor suites without paying up, sending his sons Arthur and Ira out to forcibly retrieve goods not paid for. In 1906, thugs Arthur and Ira were convicted in court of assaulting an old man whose son was in arrears. (Though they became fairly rich and had social aspirations, the Overells were perhaps never what you would call genteel, their being in trade the least of it.) After a decade spent living with his family east of Main Street, most recently in a still-extant dwelling at 242 East Adams Boulevard, it was time for a statement house in the manner of all prosperous burghers. While its bungalowesque style was replicated by many local architects to the point of quickly becoming a Los Angeles trademark and then just as quickly being seen all too often, Overell's new house, though hardly distinctive by the time it was built in 1911, may have actually been his own interpretation of the genre, given his prior architectural experience; he may very well have also acted as his own contractor. In any case, Joseph Overell made the decision to move not directly west along the still-fashionable Adams corridor but to the northwest. While ultimately his new neighborhood proved to have no more longevity in terms of exclusivity than West Adams—being not quite as far west in the burgeoning Wilshire District as those neighborhoods that would hold their cachet into the 21st century—at the time, despite the barrenness of early development, tracts in the precincts of Mariposa Avenue signified having arrived. Designated 431 before the city's annexation-related renumberings of 1912-13 altered it to 331, Overell's new gabled house—termed "Elizabethan" by the Los Angeles Times—was big and airy and had plenty of room for Joe and Anna and the four of their six sons still living at home. Sadly, Joe didn't get to enjoy his hard-earned house for very long, expiring as he did at age 59 in Long Beach on December 13, 1912. His widow assumed the presidency of what was very much a family firm—all of the Overells' six sons would eventually work for the company, if not always so amicably. (Strife at the office would turn out to be only a small part of the family's troubles; Joe and Anna's granddaughter Beulah Louise Overell would be tried for murdering her parents by blowing up their yacht in a wonderfully noir 1947 case, to be described in due course.) Although she would be dead a year after leaving Mariposa Avenue, Anna Overell was one of several widows of prominent Los Angeles merchants who took over the corporate reins when their husbands died: Mary Brent tried her hand at the helm of Brent's Great Credit House, another Main Street furniture store, and Alice Coulter became president of the swanky department store bearing her name.


It seems that after Anna Overell's sale of 331 and then her death on January 8, 1923, her six sons, as noted, were unable to keep their rivalries in check. Arthur was now head of the firm, much to the displeasure of the two youngest brothers, Robert and Lawrence, who took him to court in 1924 seeking to have him removed as trustee of their stock. Apparently, whatever the outcome of the trial, the brothers got back down to business. Given the exploding population of Los Angeles during the 1920s—the number of Angelenos rose by 115 percent during the decade—there was more than enough of a demand for demilunes and divans to support all six Overell brothers and their families in haute bourgeois comfort. Sibling tension may have only been in abeyance while the cash rolled in; after the boom, in 1935, Arthur left J. M. Overell after 32 years to open his own rival furniture concern in the next block with his sons Raymond and Harold. Ira, Oscar, Robert, Lawrence, and Walter Overell stayed with the original firm, though both stores appear to have closed some time before Pearl Harbor.

It was Walter's only offspring that would go on to bring ultimate ignominy to the family name in the dreadful year of 1947, when, two months after the Black Dahlia was found in an empty lot in Leimert Park in January, plain and plump, spoiled and lovesick 17-year-old Beulah Louise Overell and her equally immature fiancé Bud Gollum were charged with murdering her father and mother for an inheritance by planting a time bomb of dynamite on the 47-foot family yacht, the Mary E., at Newport Beach. While it seemed to be an open-and-shut case, the pair beat the rap after a 19-week trial but split up anyway. It turned out, unsurprisingly, that a bargain furniture store could not in the long run support a yachting lifestyle; Walter was by some accounts practically broke when he was blown to smithereens, rendering Beulah's likely double parricide less lucrative in the end. She ended her days a drunk in Las Vegas in 1965, having led a life as unlamented as the fashion for her name (her full story in marvelous detail may be read here). One wonders how much infamy such as Beulah's would have hurt the family businesses had they still been open in 1947; today in the age of the anti-hero, Beulah's swagger and slick avoidance of the gas chamber would probably stimulate sales of Barcaloungers and golden bric-a-brac. As it turned out the Overell name in the annals of the history of retail commerce in Los Angeles has been forever singed by bad, sad Beulah. Yet like its old house once at 331 South Mariposa, it seem that the family must be out there somewhere, perhaps even hiding in plain sight.


Quite an interesting family legacy...but back to 331 South Mariposa Avenue, which, as mentioned, Anna Overell sold in late 1921. The purchaser was George W. Moore and his son, Harold D. Moore; at the time George was the vice-president and treasurer of, and Harold an employee at, Keystone Iron and Steel Works, an old Los Angeles company that manufactured fire hydrants, lamp standards, and other street furniture. Harold appears to have married and left the house by 1927; George was gone by 1929...and there the trail of the house's history becomes complicated. It appeared early in our investigation that the Overell house had been demolished, its pieces scattered to the winds, as was the common fate of similar houses in the area despite their tender ages. Unfashionable after less than two decades and a bear to maintain as the Depression deepened, 331 became a boarding house; then, by the late '30s, its garage had likewise been turned into apartments. But then there turned up the intriguing notation made by someone, perhaps the photographer, on the back of the image that served as the basis of the illustration seen here at top: "Demolished or moved." Moved? Although moves of large houses had pretty much stopped by the early '30s, given the talents of Los Angeles house movers such as George R. Kress, it could very well have been moved. But to where? Satellite reconnaissance of the usual destinations of large houses—Fremont Place, Windsor Square, Hancock Park—did not turn 331 up on another street. A friend of Historic Los Angeles suggested that our quarry might be in Lafayette Square, but no dice...and besides, relocations of big L.A. houses were usually in a more linear direction out along the Wilshire corridor, from thoroughfares wider than Mariposa and lots less tight than that of 331. A trip to the bowels of the Department of Building and Safety was in order. There, among the permits found pertaining to the Overell house, were two issued to the latest owner, builder and developer William A. Lundberg, on October 21, 1941. These, intriguingly, indicate that the house was cut into two pieces that were separated on the lot and remodeled into apartments by Hollywood architect J. Aleck Murrey. One unit became 331¼-½ South Mariposa Avenue, the other, 339¼-½. And so there after all remains the Overell house, hiding in plain sight if in pieces on the lot on which it was built in 1911; today, five separate units are wedged on to the site. 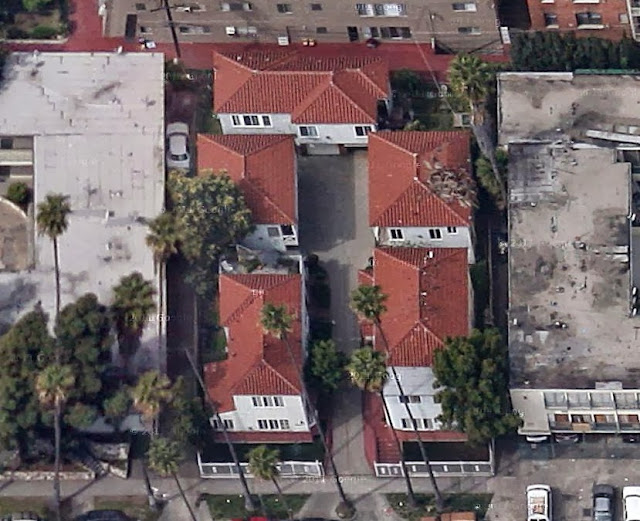