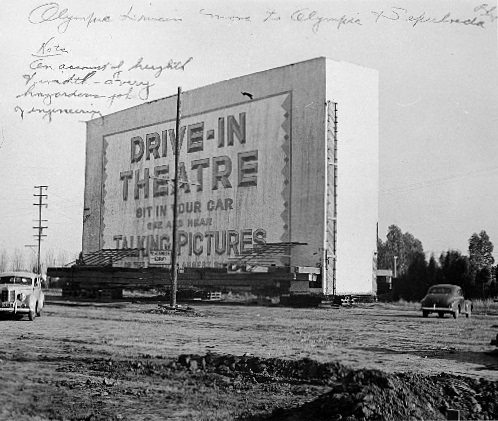 George Kress, the undersung star house-mover of Los Angeles, was never shy when it came to new challenges. Major street widenings in the '20s had contributed to his business, and at the time the economics of real estate and construction made it feasible to move even very large houses to new locations miles away from their original sites. After the Depression affected his business along with the increase in traffic and utility lines of a city that had grown 136 percent from 1920 to 1930, the Kress House Moving Company—later renamed the Kress Engineering Company—still found jobs of a less domestic nature. In 1935, Kress devised a plan to save the façade of the 13-story Commercial Exchange Building, still standing downtown on the southeast corner of Olive and Eighth streets. The owner of the building was prepared to cut off five feet of the west end of the building when the city exercised eminent domain in its plan to widen Olive Street; it was George Kress who suggested—and planned and accomplished—removing the five feet of brick, masonry, and steel from a point close to the center of the Eighth Street façade, placing the 5,000-ton west end on rollers, and pushing it back to join the east end. How this was all less expensive than simply lopping of the Olive façade and bricking it back up is unknown, but what was accomplished was the preservation of the aesthetics of a building in Los Angeles's still-vibrant business district.


Another Kress project came in 1944 when the massive outdoor screen at the southwest corner of Pico and Westwood boulevards was lifted up and transported 1.7 miles west to 12109 West Olympic Boulevard at the northwest corner of Bundy (rather than Sepulveda, as noted on the top photograph above). It had opened on Pico in 1934 with a single huge speaker on top of the screen—very obnoxious, if you were living in the neighborhood; at first known simply as the Drive-In Theatre, it was later referred to as the Pico Drive-In once others of the type were quickly built in Los Angeles. At a time when propriety required a certain amount of dressing up even just to go to the movies at a downtown theater, the lady of the house was lured to the drive-in with the slogan "Leave Your Girdle at Home." In its new location the Pico became the Olympic, which lasted until 1973. (For an excellent brief history of local drive-ins, see the Los Angeles Times.) 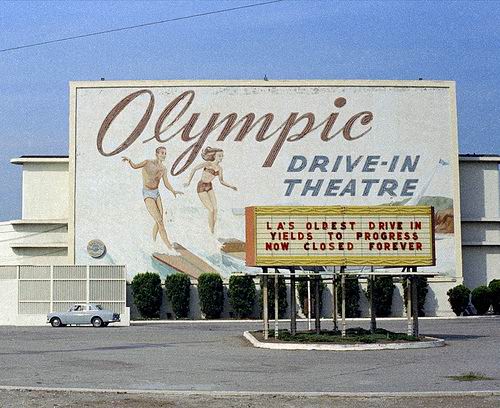