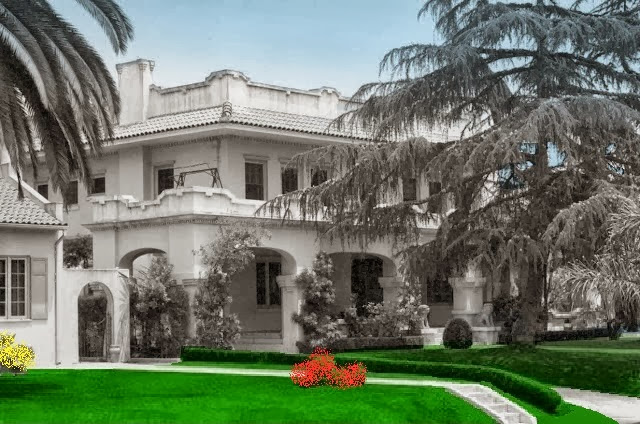 This typical Los Angeles house of the old western suburbs has an interesting multicultural history. Built in 1914 on what was then the very edge of the city—the Home Villa Tract in which it was built was part of the Colegrove annexation of just five years before—the Mission Revival house initially addressed 2841 West 27th Street represents a particular crossroads the affluent Los Angeles home builder faced before the First World War, one that determined the arc of the house's history. In the year of its construction, the West Adams District was comprised of older neighborhoods extending back to Main Street and newer ones almost as far west as Crenshaw Boulevard. Enormous houses on veritable in-town estates were going up along Adams Street quite far from its original bon ton stretch roughly between Figueroa and Hoover. But at the same time, so too were palatial new residences being built out along Wilshire Boulevard; Beverly Hills was rising, if slowly; streets and sidewalks were being poured in the original Windsor Square; Los Feliz was being developed; and Pasadena's fashionable mien was steadfastly alluring. The Angeleno who found himself wishing to build a big house knew not where to settle in the vast city—while it wouldn't be determined definitively until the Depression, it stood to reason that not all of the city's neighborhoods of enormous houses could survive with their reputations for fashion intact. As a linear residential neighborhood, Wilshire Boulevard would die fitfully through the 1920s, perhaps 98 percent of its houses ultimately destroyed; West Adams would fade dramatically in its entirety even if much of its stock of mansions remains, some altered to accommodate many more people than originally intended and some adapted to new uses. The demographic forces that pushed the rich this way and that in Los Angeles actually have less to do with fashion and more to do with the dramatic population growth of the '20s and the resulting housing crunch, compounded by aging structures and then the Depression. (A short summary of the fate of West Adams may be read here.) One response to the dramatic population growth of the City of Los Angeles over the years was annexation of new territory, which resulted in address realignments over the years, particularly in the West Adams District. Initially designated 2841 West 27th Street, the Hauerwaas house became 3805 by 1920; downtown stationers were once again delighted with yet another change four years later, when "3741" was settled upon.


Back to 27th Street. Born in Wurzburg, John A. Hauerwaas came to Los Angeles in 1883 at the age of 21, making haste to invest lucratively in real estate, with a fallback in beer. He also earned a reputation as a sportsman, the Times once calling him the "Best Shot of Los Angeles." As a partner in Adloff & Hauerwaas, he bottled the popular Schlitz and Wieland brews. With ever-growing Los Angeles requiring ever more land and beer, Hauerwaas had it all covered; had he survived beyond the age of 44 he might have left an even bigger estate to his wife Lucy and their five children. As it was, the family was well-fixed. After nearly a decade in Alfred J. Salisbury's Victorian house on Hoover Street (Los Angeles Historic-Cultural Monument #240), Lucy decided to go modern two miles west out on 27th Street. One wonders if her husband would have decided on the new district Lucy chose. Would he have better been able to read the tea leaves of Los Angeles real estate and have moved his family more northwesterly toward one of the ultimate winners in the stakes for in-town neighborhoods of fashion? Lucy appears to have been a woman able to make up her own mind, one who probably understood the risks of real estate and that in Los Angeles, the chips could fall anywhere. After acquiring a 32,000-square-foot lot in the Home Villa Tract, she engaged as architect for her new house a non-architect, William Bosbyshell. A banker and real estate developer, Bosbyshell seems to have developed enough of a creative streak as a contractor to design an adept modern counterpoint to Lucy's gabled former home. The Department of Buildings issued a permit to begin construction on March 20, 1914. Now nearly a century old, the resulting white stucco Mission Revival house has stood the test of time and the vagaries of its neighborhood.


Lucy Hauerwaas's mettle was not to be underestimated. Evelyn, the youngest of her five children, was born 19 days after her husband died. Three-year-old Evelyn accompanied her mother and four siblings on a remarkable automobile trip from April to November of 1910. The family drove north from Los Angeles to Vancouver and then across the Canadian Rockies to Chicago before reaching New York, where they boarded the S.S. Amerika along with the car for a motorized Grand Tour. Back home on 27th Street, the rest of the decade played out with the older children marrying; one daughter, Lucy, married tire manufacturer Roy Renzo Meads and would later live with her family on 27th Street following her mother's remarriage, after 19 years, to rancher Jasper Newton Teague, known at one time as the "Cauliflower King" of Southern California. Moving then to Arcadia, Lucy Teague appears to have left her house to her children. While Lucy and Roy, who were divorced before long, lived in the house with Evelyn, it was another sister, Gertrude, married to the wonderfully named Lafayette Rounsabelle, who appears to have taken charge. Perhaps feeling stuck with a white elephant in the worst year of the Depression, Mrs. Rounsabelle filed an application with the buildings department in 1933 to alter the house for use as a boarding school. The next phase of 3741 is somewhat unclear, with one source indicating that the house was retained by the family and let to the Kalifornia Kiddie Kamp—soon renamed Kalifornia Kiddie Kollege—the initials of which one hopes was only a clueless choice. While foreclosure would seem unlikely given the presumed deep pockets of Lucy Teague and the vast landholdings of her husband, perhaps 3741 was the actual responsibility of the Rounsabelles and the divorcing Meadeses who were finding themselves with too much house on their hands and in over their heads financially. Another source indicates that the Bank of Hollywood came into full possession in 1933 and was now the landlord, selling off during its ownership a significant portion of the lot on the east side of the house. By 1937, in any case, the house reverted to residential use when a second interesting family came into possession of 3741 West 27th Street.


California-born Masako Kusayanagi was a Nesei, a second-generation Japanese, who appears to have led her family from a small house at 752 Micheltorena Street to the big house on West 27th when she had just recently been graduated from U.S.C. and was pursuing a medical career. It is unclear as to why the house would have been put in her youthful name when it was bought from the Bank of Hollywood, unless it was a prescient attempt by her father to circumvent trouble in the next several years. Takejiro Kusayanagi had been the proprietor of a dry goods store on Main Street since 1906; he and his wife Matsu had five daughter and a son ranging in age from 10 to 27 in 1937. There was plenty of room remaining on the lot for their addition of a formal Japanese garden, and for the family in the new house, although their tenancy would be interrupted after Pearl Harbor when the government ordered the internment of Japanese Americans in February 1942. By cleverly putting the house into the name of their Kusayanagi Investment Company, the family was able to retain 3741 during their stay at Manzanar for the duration. Before leaving for the Owens Valley Masako had been a resident physician at Los Angeles County General Hospital. In Manzanar she was on the staff of the camp hospital, but when she returned to Los Angeles and to West 27th Street, Dr. Kusayanagi was denied her former position at County General. The family retained the house until passing it along to a church in 1954, just after Takejiro and Matsu finally became naturalized U.S. citizens.

The Centenary Methodist Church, which then had its sanctuary at 3500 South Normandie, served a large Japanese congregation, presumably among them the Kusayanagis. The year after the church came into possession of 3741, it submitted an application to the city to convert it into a boarding facility for 20 people, the house's second use as a group facility. As it prepared to move from Normandie and 35th back to its original neighborhood of Little Tokyo in the early 1980s, the church sold 3741 to Logan Westbrooks, Director of Special Markets at CBS Records in the 1970s and founder of Source Records. Westbrooks also founded the Helping Hands Home for Boys, which moved into 3741. Until recently the Hauerwaas house remained a boarding facility, as it had been since 1955, and during the '30s; in 1998, Westbrooks sold it to Nebraska-based Father Flanagan's Boys' Home.

One of the seemingly intractable myths attached to the Hauerwaas-Kusayanagi house is that it was once the residence of heavyweight champion Jack Dempsey. This information crops up in more than a few items one encounters when researching the property. The most thorough investigation has been done by Anna Marie Brooks in preparing documents proposing it for recognition by the city as a historical site; in none of her material does the name Jack Dempsey appear (Ms. Brooks's comprehensive report, including an exhaustively detailed description of the house, may be read here). In the 1920s Dempsey did live in a Mission Revival house in West Adams, one at 2415 South Western Avenue, now demolished; by late 1925 he had moved miles north to Los Feliz. The property may well be on Father Flanagan's hands for a while, given the New Jersey marketing broker's limited knowledge of the house and its city. His website refers to the house as "Built in the 1920s...a perfect example of the elegant architecture that graced the Los Feliz district of Hollywood in the 1920s...3741 West 27th Street was the home of the World Heavyweight Boxing Champion, Jack Dempsey, when he was a fighter. It was donated in 1995 to Father Flanagan’s Boys Town by the boxer’s daughter.” Where to begin with such a clueless, confused listing?

The setting is less verdant, the neighborhood less desirable, but the house looks pretty much the same today as it did in 1914. Perhaps not a typical Los Angeles house of the old western suburbs after all, 3741 West 27th Street has justifiably become Los Angeles Historic-Cultural Monument #990.