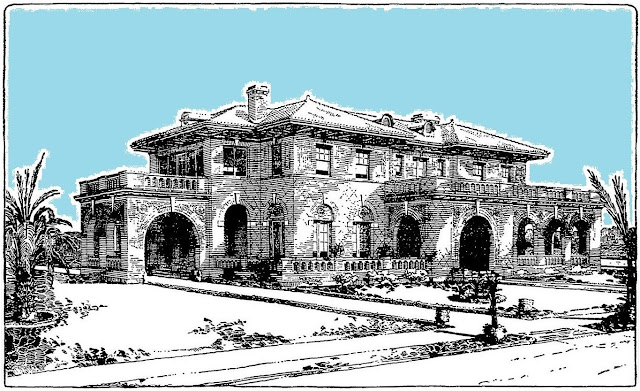 
Born in northwest Louisiana in 1866, Judson Claudius Rives was living in New Orleans in 1910. Preparing to make big changes in his life by marrying, apparently for the first time, and by moving west to Los Angeles, Rives would be entering the hot real estate market in his adopted city. Having made his fortune in lumber, he was ready to invest in property, including a parcel for a serious house for himself and his bride in one of the many new westerly suburbs of the city. The Los Angeles Country Club, planning to decamp for the Westside grounds it occupies today, had sold its former site at the northwest corner of Pico Boulevard and Western Avenue to the developers of the Country Club Park subdivision. For his lot there, at the center of the eventual fully improved tract (today delineated by preservationists as an area within the boundaries of Western, Pico, Olympic, and Crenshaw), Rives hired Alfred F. Rosenheim to design a rambling brick house that remains today at the northeast corner of Westchester Place and West 12th Street. An item in the March 29, 1913, issue of the trade journal Southwest Contractor and Manufacturer described the house as follows:

"BRICK RESIDENCE—Archt. A. F. Rosenheim...has completed plans and will take bids next week for the erection of a 2-story and basement 12-room brick residence...for Judson C. Rives. The design is Italian renaissance. A terrace paved with Welsh quarry tile will extend almost entirely around the house with a porch at the main entrance and porte cochere on the side. Extreme  dimensions 60x70 ft. Concrete foundation, tapestry brick facing with pattern work of different shades of the same brick, terra cotta trimmings, clay tile roof, copper gutters, downspouts and dormers, structural steel, five bathrooms four of which will have tile floors and wainscot and marble trim, tile wainscot on sink side of kitchen, marble vestibule at main entrance, Mott plumbing fixtures, plate glass windows, hot water heating system with thermostat control, vacuum cleaning. The drawing room will be finished in mahogany and library in oak, and there will be marble mantels in both; hardwood floors throughout. There will be a large solarium with Welsh quarry tile floor and Grueby tile walls and fireplace; also a circular breakfast room 13 ft. in diameter. The brocaded silk wall decorations and draperies have already been purchased in the East."


A building permit was issued to Rives by the Department of Buildings on April 23, 1913. The illustration above the title is based on a rendering that appeared across five of seven columns in the Los Angeles Times on May 10, 1914, headlined "Beautiful Brick Mansion Recently Completed in Westchester Place."


Judson and Anna Rives made the most of their new house over the next few decades, entertaining frequently. As it turned out, Westchester Place had been one of many developments opened before the First World War all vying for the considerable dollars of the affluent looking for novale as the eastern West Adams district began to fray. Wilshire Boulevard was still competitive residentially in 1913; successful in the long run were emerging Beverly Hills and closer-in Windsor Square, opened in 1911 north of the psychological barrier of Wilshire Boulevard. Had Rives chosen to build there, the house would most likely not have eventually become a convent. Mr. Rives died at home on November 16, 1940; as the Second World War wound down, his widow made plans to leave her home of 30 years. The Sisters of Social Service, a Benedictine order, acquired the house. It seems that the order lived up to word "social" in its name, doing more than praying at home. As one of their number was quoted in the Financial Times in 2003, "'When I selected to enter this religious community I did so because of the work,' recalls Sister Phyllis McCarthy, 73, who studied psychology at UCLA and worked as a parole officer before joining the order. 'They weren't nunny nuns.'"  The sisters were as involved in their community as any group could be, not remaining elusive and cloistered but making full use of 1130 Westchester Place much in the way the Rives had intended when they built it in 1913. The sisters would remain until 1994.

Enter film producer Jonathan Shestack, who converted the house back to a single-family residence. After years of decline, the neighborhood was considered an eccentric choice for a family of movie means. The adventurous Shestack brought a new balance to 1130 Westchester Place, where his young family succeeded the Riveses, a couple on their own, and the large family of Sisters. In 1995 he and his wife Portia Iversen founded and based their advocacy and fundraising group Cure Autism Now in the house. With the Shestacks having led the way, neglected neighborhoods founded a century or more ago as refuges for the rich are becoming magnets for new generations as Los Angeles gentrifies through the 2010s; the significant housing stock of the Country Club Park district, at the center of which is Westchester Place, as well as that of old West Adams, is being renewed with welcome vigor. 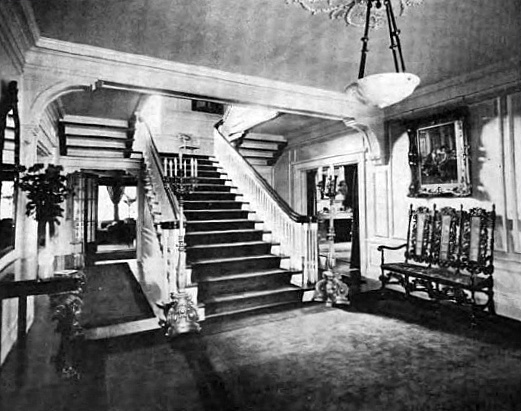 Illustrations: LAT;  The Architect and Engineer of California, January 1918