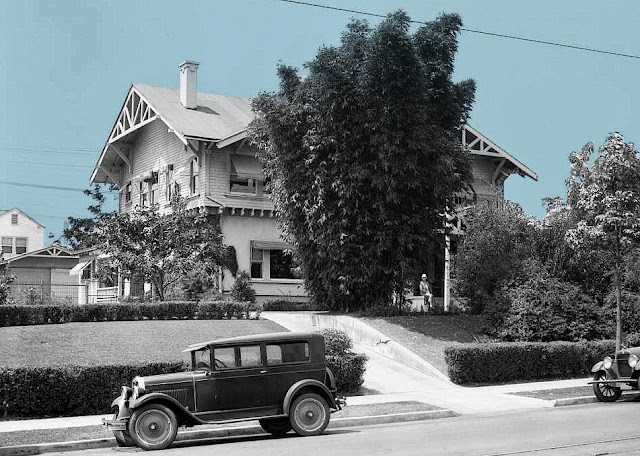 Today there is often more to the photographic collections of many libraries than first meets the eye—a case in point would be that of the University of Southern California, whose digital database includes a "zoom" feature that allows for some extraordinary discoveries not at all evident in images initially found. An example of such serendipity would be the house built at 317 South Vermont Avenue in 1912 by John N. Kirkland, an owner of the American Drug Company, which he had formed with his brother Derwent in 1907 and which merged with the Sun Drug Company in 1922. Almost indistinguishable in a circa-1930 panorama taken from the east side of Vermont looking west and northwest, the house reveals itself as we, like eagles, zoom in: 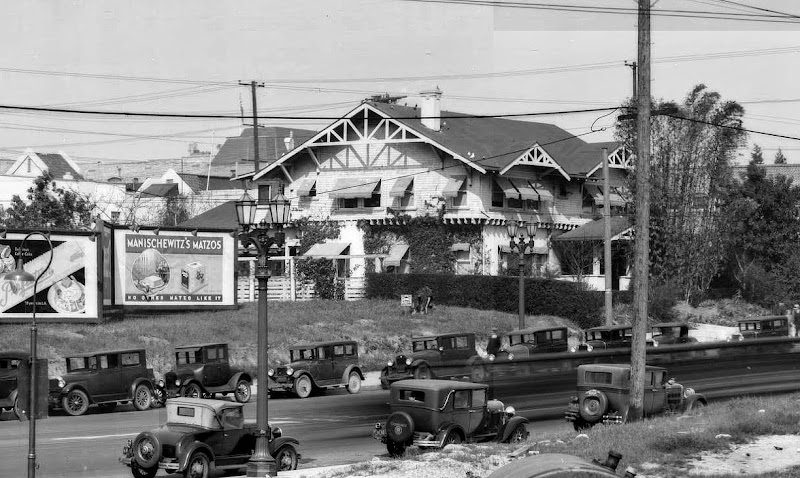 The Department of Buildings issued John Kirkland a construction permit for an eight-room residence on May 6, 1912; Pasadena architect Luther S. Munson was indicated on the document as the designer. At the time that 317 was built, South Vermont was a narrower residential street not yet slated to become a primary north-south arterial road. Major street alterations in the planning stages during the mid-teens would drastically alter the domestic tranquility of the Kirkland house and its neighborhood, though it must be said that quite a few builders of big houses in the Wilshire District suffered from a similar kind of bad timing, simply a risk inherent in any real estate endeavor in a city experiencing growth as explosive as that of Los Angeles. The Kirklands were no doubt encouraged in the viability of their residential effort by the grand estate being built around the corner at the same time—it was once at 255 South New Hampshire—by former Los Angeles mayor Henry T. Hazard. While the Kirkland family would own their house into '50s, they began to rent parts of it after 1920; an early tenant was the Russian Arts Club. Instead of throwing in the towel completely and selling the house to commercial developers—or having it jacked up and moved to a new neighborhood, as more than a few Angelenos did—the Kirklands ignored offers to buy, stayed put, and even built a separate small dwelling at the rear of the property in 1922 for additional income. The garage was converted to yet another dwelling in 1932, by which time Vermont was overwhelmingly commercial and undoubtedly noisy, heavily trafficked with automobiles and cars of the V line of the Los Angeles Railway. Yet neither these incursions or John's death in 1933 would pry Mary Kirkland from her home; her 53-year-old son William, also in the drug business and apparently no longer married, moved in by the end of the decade. (The Kirklands also had a daughter, Dorothy, who was born in 1893; she became a cellist, never married, and died in 1935.) The house at 317 South Vermont had been further subdivided by this time for income in addition to that coming from tenants at the rear of the property. By 1942, it was Mrs. Kirkland and William who were listed in the city directory at 317½, out back; the converted garage was demolished after a fire in 1947 as the Kirkland tenancy began to wind down.

While it is unclear as to whether she was still living in her 43-year-old house, Mary Kirkland died at 93 on September 2, 1955. Information accompanying the photograph below and that on which our top illustration is based, which were discovered after the panoramic view, indicates that they were commissioned by Mrs. Kirkland in 1928, perhaps to record the house for posterity, or with a plan in mind to sell, or perhaps as part of a scheme to market the house for commercial uses. After the Second World War, with Kirklands possibly still in residence in part of the house, the Pioneer Women's Organization for Palestine was at 317; later, offices of the Labor Zionist Movement of Los Angeles were there. A real estate operator specializing in junkets to Hesperia was listed at the address in 1956; two years later, a perhaps related enterprise, the California City Development Company, began promoting that famously hyped Mojave Desert community. The house had been sold by the Kirkland family by that time; after what was now known as the Department of Building and Safety issued a demolition permit on January 29, 1965, 317 South Vermont gave way to the inevitable parking lot—even more ignominiously, for a McDonald's that opened in 1971. 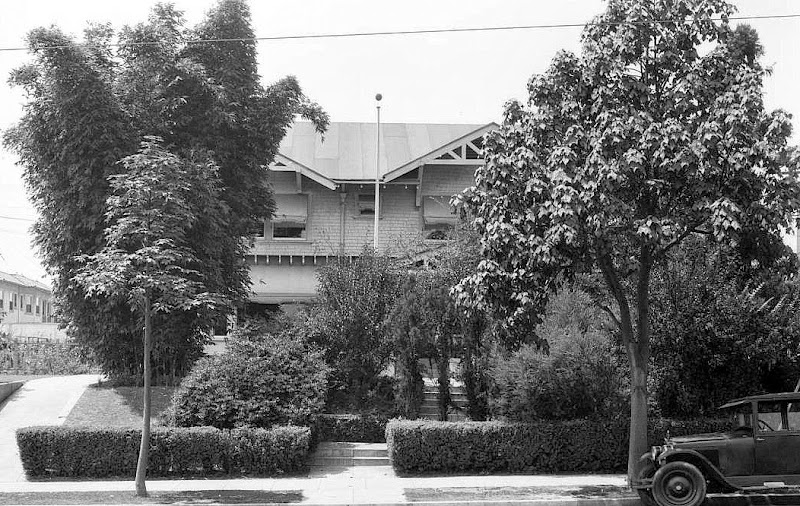