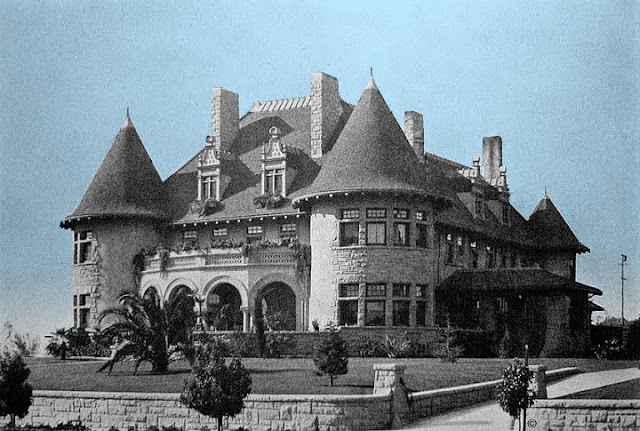 
Still standing atop Sugar Hill is the Frederick Hastings Rindge house at 2263 South Harvard Boulevard; a proud Harvard graduate, some sources indicate that Mr. Rindge had a say in the naming of his street. With the fortune he inherited, Rindge became a developer and investor in utilities, and, especially if you were a fellow teetotaler, a philanthropist. He died in 1905, almost two years to the day after moving into his new house in September 1903. His wife, Rhoda May Knight Rindge, famous in her own right as a Malibu firebrand, stayed on at the Frederick Roehrig–designed palace until her death in February 1941, with most of her establishment ilk having fled the district for newer suburbs to the north and west. Among the movies the house has appeared in is The Brasher Doubloon of 1947, based on Raymond Chandler's The High Window.